Jessica Korda and Johnny DelPrete had reportedly been dating since 2013, but now they have tied the knot. 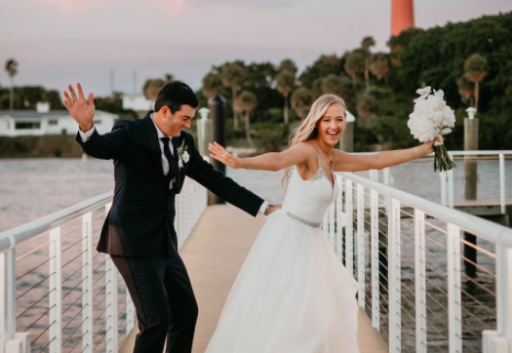 Jessica Korda had a weekend to remember as she finally got married to her long-term partner and former professional golfer Johnny DelPrete.

Both of the newlyweds posted pictures on their Instagram pages of the celebrations and it appeared to be a great occasion for all involved.

The pair were married amongst a small group of family and friends at The Pelican Club in Jupiter, Florida.

At the wedding were fellow golfers Alison Lee, Sophia Popov, Jodi Ewart and also her brother Sebastian Korda and of course, Nelly Korda. Many people from the sports world sent their congratulations on social media.

RELATED: PGA TOUR PRO SLAMS PUTTER THEN HELICOPTERS IT INTO THE MIDDLE OF A POND IN EVENT

Sister and World No. 1 Nelly sent her best wishes as did Megan Khang, Georgia Hall, Rickie Fowler, Paula Creamer, Michelle Wie and also Venus Williams from the world of tennis.

Korda and DelPrete reportedly first started dating in 2013 which was two years after the 28-year-old's debut season on the LPGA Tour. DelPrete is a former professional golfer who is now an estate agent.

He is a graduate of the University of Mississippi and he now works for a company called Nest Seekers International. Recently, he and Justin Thomas attended the wedding of PGA Tour player Bud Cauley.

Earlier this year, Korda picked up her sixth win on the LPGA Tour at the Diamond Resorts Tournament of Champions, beating Danielle Kang in a playoff.

She would have been disappointed to finish in a tie for 40th place at the CME Group Tour Championship, but she achieved five top-10's this season and finished the year at 22nd in the Rolex Rankings.

jessica korda
LPGA Tour
nelly korda
wedding
johnny delprete
Rickie Fowler
Previous
Golfer attempts to SMASH drive but ends up hitting it 30 YARDS BEHIND HIM!
Next
QBE Shootout: How much did Kevin Na and Jason Kokrak earn for their victory?