Justin Thomas said he made a "terrible, terrible judgement call" following his homophobic slur at the Sentry Tournament of Champions. 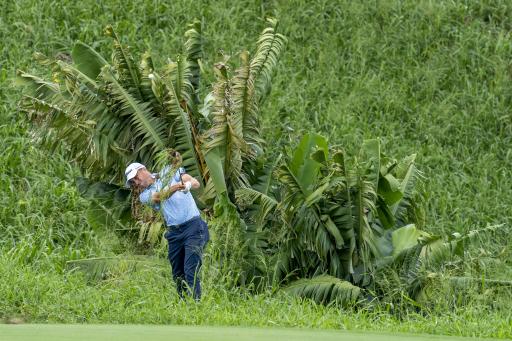 Justin Thomas shot a 7-under par final round at the Sentry Tournament of Champions to miss out on the play-off by one stroke, but the defending champion admitted after his round that golf wasn't the main thing on his mind, following an incident on Saturday where he said a homophobic slur after missing a putt.

Harris English went on to win the event in Hawaii, beating Joaquin Niemann at the first hole of the play-off, while Thomas made a mistake at the par-4 17th which meant his birdie at the last wasn't good enough to join the pair for the extra hole.

Thomas, who has already apologised for what he said on Saturday, played some fantastic golf during the final round in Hawaii, but his "terrible, terrible judgement call" was playing on his mind.

Justin Thomas vowed to "become better" as he dealt with the fallout following his audible homophobic slur on day three at the Sentry Tournament of Champions.pic.twitter.com/CEVkpEqspg

"Golf wasn't the main thing on my mind today," said Thomas. "Usually, being four back going into Sunday I'm thinking about one thing and one thing only and that's trying to win the golf tournament.

"But I obviously had a lot of other things on my mind last night. I mean, I apologised yesterday. I don't need to explain myself. I clearly screwed up. I made a terrible, terrible judgment call.

"But I thought a lot last night that, we grow a lot as people over time. I wish that I could learn to grow a different way than the way that I chose to do it, but unfortunately it's in the past and there's nothing I can do about it now.

Related Articles
LIV Golf's Phil Mickelson takes aim at PGA Tour: "I will never understand!"
Farmers Insurance Open: How much they are playing for

"And, again, it definitely was a distraction out there today. But now I just get to take time going forward and try to become better because of it."

The World No.3's embarrassing mistake aside, Thomas played a fantastic tournament and the 27-year-old is very happy with where his game is at right now, as he now switches tours for his next tournament, to play in Abu Dhabi on the European Tour.

"It's a good start and get a week off before going to Abu Dhabi, a place I've never been, so I'm excited for that," he added. "Golf-wise, I definitely, I feel great about the start.

"I mean, the golf seemed pretty irrelevant today for me in terms of what the mistake that I made yesterday, but in terms of my golf, I love where it's at and I really feel like that I played well this week.

"I shot 24 under through four rounds, 10 shots better than last year, and it's not going to get it done."