Justin Thomas was one of the first people to congratulate Rory McIlroy for his win on Sunday and he even thanked GolfMagic in the process! 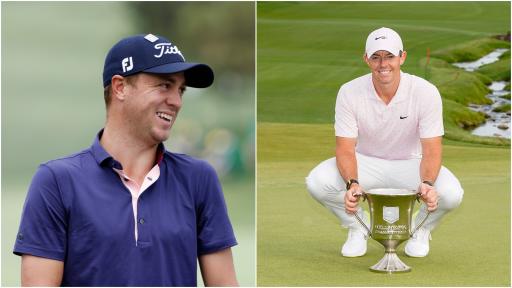 Justin Thomas took to social media on Sunday night to congratulate Rory McIlroy for winning the Wells Fargo Championship for the third time in his career.

McIlroy ended his year-and-a-half winless drought with a one shot victory at Quail Hollow, a place that the Northern Irishman holds close to his heart.

Standing on the 18th tee with a two shot lead, McIlroy found trouble by the hazard in the left rough, but with the help of his caddie Harry Diamond, the pair made the decision to take a penalty drop and play for a bogey.

The plan worked perfectly for McIlroy and two-putted his way to a 19th PGA Tour title.

Thomas shot a level par final round to finish the tournament in a tie for 26th place, but the World No.2 was quick to congratulate his potential Ryder Cup rival on social media.

The message included a thank you to our team at GolfMagic, who had previously posted a story on social media highlighting Thomas' admiration for McIlroy, with Thomas also predicting he would be back to his best sooner rather than later.

Well... thanks for making me look good congrats @McIlroyRory that was some great golf played out there. Quail Hollow was a difficult test this week. Well done! https://t.co/GcwHgXCfqz

After lifting the trophy in front of his wife and daughter, McIlroy posted his own message on social media, thanking everyone for their support.

"Fell in love with Quail Hollow the first time I played it and knew it was special," McIlroy said. "From my first win in 2010 to today, each year the fans, staff, city of Charlotte make the week an unforgettable experience. The fans carried me through today. Thank you for the continued support."

Prior to the Wells Fargo Championship, McIlroy had taken a month away from the PGA Tour to work on his game having struggled in recent months.

McIlroy had slipped to 15th in the world rankings - his worst position since 2009 - but his most recent victory placed him back inside the top 10 into 7th and he is now the favourite with the bookmakers to win the PGA Championship later this month.