Golf fans TAKE THE MICK out of PGA Tour pro from behind the ropes! 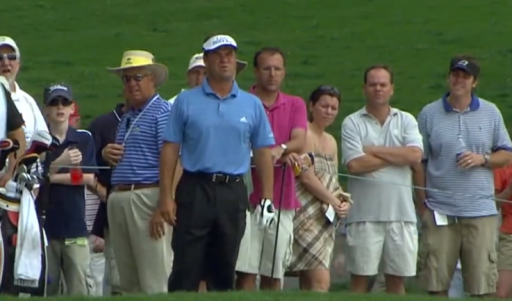 It might have taken place some time ago, but a video has surfaced this week on Skratch's social media channels of three golf fans taking the mick out of former PGA Tour pro Jay Williamson - and it's an absolute classic!

In the video, Williamson, who won once on the Nationwide Tour but lost out in two playoffs on the PGA Tour in 2007 and 2008, was struggling to locate the pin from the rough as he weighed up his club selection with his caddie.

DEAL OF THE WEEK: BUY RORY MCILROY'S BRAND NEW TAYLORMADE PUTTER - FOR MUCH LESS THAN ITS RRP!

The American, standing at 5 foot 10 inches and 180 pounds, then proceeded to twice jump up and down to try and get a better look at the top of the pin.

"What's hilarious is the fans aren't trying yet getting twice as much air, guy got no hops," said one golf fan.

"I can hear their dad jokes now - incredible," wrote another golf fan.

"Is that the legendary Jay Williamson," wrote one golfer.

"This reminds me of a video game where you select the character and they hop up, forget the game though," said another golf fan.