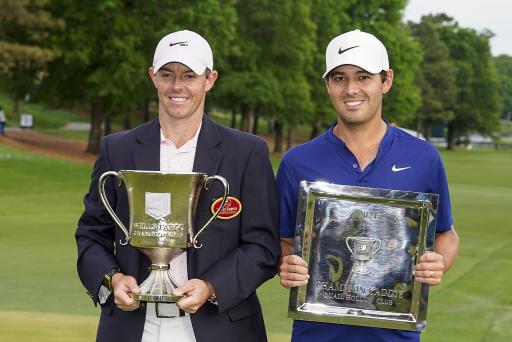 Rory McIlroy has praised his caddie and childhood friend Harry Diamond for the influential role he played during the final hole of the Wells Fargo Championship.

When McIlroy stepped onto the 18th tee he held a two shot lead and looked set to win his 19th PGA Tour title fairly comfortably, but things changed very quickly.

Opting with a 3-wood off the tee, McIlroy was trying to play it safe, but ended up double-crossing his shot and pulling it left into the thick rough, which luckily missed the creek but still found an awful lie inside the hazard line.

McIlroy pulled out a wedge and stepped up to his ball to see if he could chip it back onto the fairway, but with a horrible lie on a slope, it was a risky shot to play.

Diamond persuaded McIlroy to take a penalty drop, where he would then get to replace his ball and go for the green, which he pulled off incredibly well and left himself with two putts for a bogey, to win by one.

WATCH MCILROY'S THIRD AT 18 BELOW:

"Harry was awesome out there today, especially that decision on the last," McIlroy said. "I was ready to get in there and try to play that with a lob wedge and he said 'Let's take a step back, let's think about this. Where's the best place you're hitting your third from?'

"So he calmed me down and slowed me down a little bit, and ultimately we made the right decision and I dropped instead of trying to play that shot out of the hazard. I hit a great third shot onto the green and was able to two-putt from there.

"I think this is our sixth win together and it's probably been our best one. Bay Hill back in 2018 was great because I hadn't won in a while, but this is even better just because Harry's been there every step of the way.

"The tough parts that I've had to endure over the last few months, he's been with me every step of the way and it's nice to come through all that with him and to get into the winner's circle again."