Justin Thomas on his World Ranking position: "It p****s me off"

Justin Thomas is not happy with where he stands in the Official Golf World Rankings having dropped to number eight in 2022. 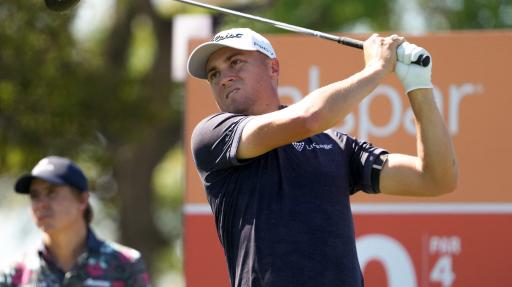 Justin Thomas was very annoyed with his position in the Official Golf World Rankings ahead of the Valspar Championship.

During his career, Thomas has spent five weeks at World No.1 but he has not been at the summit since winning the WGC - FedEx St.Jude Invitational in 2020.

Being eighth in the world rankings is certainly nothing to be embarrassed about, but the 2017 PGA champion feels his game reflects a better ranking.

The top three spots are occupied by Jon Rahm, Collin Morikawa and Viktor Hovland who have been among the most consistent performers on the PGA Tour in recent months.

Club twirl worthy.@JustinThomas34 saw his opportunity and nailed it

Thomas is winless on tour since The Players Championship in 2021 and he put his ranking down to the level of competition that now exists in the sport.

"To be perfectly honest, it p****s me off where I am in the world ranking," Thomas said.

"But it just goes to show the level of golf that's being played. I clearly have not won very many golf tournaments in the last two years, a year and a half, at least, from other parts of my career.

"But I've played some pretty damn good golf and it's just if you're not winning tournaments you're getting lapped right now and that's just the way that it is.

"And that's a good thing for the game of golf. Having Patrick Cantlay do what he did last year pushes me to become better and having Collin Morikawa and Jon Rahm and Viktor Hovland play as good as they are and be in contention in all the majors and win the biggest golf tournaments.

"Selfishly and the jealous side of me wants that to be me. So it gets me working harder because your main goal is to have no names above you in the world ranking and I definitely have more ahead of me than I would like."

Thomas is maybe harsh on himself. In seven events on the PGA Tour in 2022, he has made four top-10s. He is a 14-time winner and of course, a major champion.

He is in good shape to win his 15th title this week at the Valspar Championship. He shot 5-under-par in the first round to finish two shots behind the four leaders on 7-under-par.