Justin Thomas has not made a top-10 finish on the PGA Tour since he won the Players Championship in March. 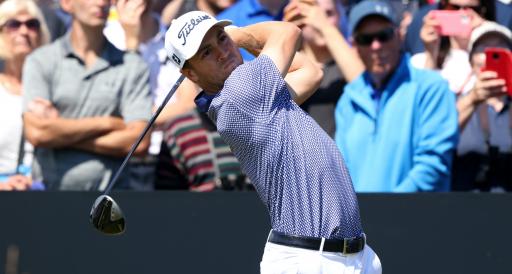 Justin Thomas made a great start to his week at the Scottish Open with an opening-round 65 at the Renaissance Club on Thursday.

The World No. 3 is intending on preparing for the Open Championship at Royal St. George's next week and he currently sits in a tie for second place on 6-under-par, behind Englishman Jack Senior on 7-under-par.

Thomas, who finished tied ninth at the 2019 Scottish Open, made a good start to the first round with birdies on the 3rd and 5th holes. The round was highlighted by a superb eagle on the par-5 7th hole.

The 28-year-old looked surprised when his 90-foot putt for eagle tracked toward the hole before dropping. He added birdies on the 16th and 18th holes to finish on 6-under-par for the tournament.

The 14-time PGA Tour winner has not finished in the top-10 since his win at the Players Championship in March, so he will be hoping that he has found better form in North Berwick.

Thomas' playing partner Rory McIlroy made four bogeys on Thursday to finish with a score of 70. Although the Northern Irishman made three birdies on the front nine, he also made three bogeys on a stop-start day.

Last week, the four-time major champion said that he needed to sharpen up his game in the lead-up to the Open Championship and a good finish at the Scottish Open would be perfect for him.

US Open champion Jon Rahm also made a great start to his week at the Renaissance Club, carding a 5-under-par 66 to sit two shots off the lead.

The Spaniard is making his first appearance since his first major win at Torrey Pines and he made seven birdies and two bogeys, in what was a typically impressive round.

This impressive trio of Thomas, McIlroy and Rahm will tee off at 8 am on Friday morning to build on their first-round scores.

NEXT PAGE: ENGLAND GOLF CONFIRMS FLAGSTICKS CAN BE REMOVED FROM JULY 19