Justin Thomas reveals what he has done with the MAJORITY of his Ryder Cup gear!

Justin Thomas continues to prove why he is one of the most loved PGA Tour professionals on the circuit. 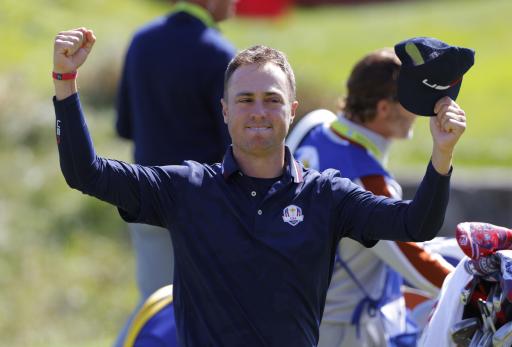 Justin Thomas continues to prove why he is one of the most loved golfers in the world by declaring he has left the majority of his 2020 Ryder Cup gear in the hands of the PGA Tour's local First Tee program for kids.

Thomas also did the same thing after his Presidents Cup appearances in 2017 and 2019, along with his debut Ryder Cup appearance in 2018.

Thomas, who has amassed close to $45 million in prize money during his seven-year career so far on the PGA Tour, was speaking to the media ahead of this week's CJ Cup - his first event back since Team USA's record-breaking 19-9 victory over Europe at Whistling Straits.

"I quickly realised that I'm not going to wear this stuff anywhere," said Thomas, who lines up with Phil Mickelson's long-time caddie Jim 'Bones' Mackay on the bag this week in a season-long partnership.

RELATED: JUSTIN THOMAS GIVEN NEW NICKNAME AT THE CJ CUP

"I remember Ryder Cup, I kept a lot of stuff and it sat in my closet for so long and I never wore any of it.

"The T-shirts and hats and stuff like that, but I'm not going to go out to the golf course in a Team USA Ryder Cup or Presidents Cup shirt, so I always just tell the PGA or the PGA Tour... just donate it to the local First Tee because they're going to get a lot more use out of it than I do."

RELATED: WHERE DOES RORY MCILROY GO AFTER A DISAPPOINTING RYDER CUP PERFORMANCE?

The same thing happened two weeks ago at Whistling Straits, where the former World No.1 picked up 2.5 points out of a possible 4.

"I took some hats, I took a couple T-shirts," said Thomas.

"Yeah, I mean, same thing, I did it in Australia, too.

"There's so much stuff that I'm trying to not be a hoarder and just take it home and sit in my closet. Someone else is going to get a lot more use out of this. The memories are enough for me."

Thomas has now taken part in two Ryder Cups and two Presidents Cups since 2017, and has been on the winning side on three occasions.

RELATED: JUSTIN THOMAS SOUNDS OFF ABOUT THE MAIN PROBLEMS IN GOLF

The First Tee program works in close partnership with both the PGA Tour and PGA to benefit young budding golfers and help grow the game at large.

Here's what First Tee is all about, according to its website:

First Tee began in 1997 as a partnership among the LPGA, the Masters Tournament, the PGA of America, the PGA TOUR, and the USGA to make golf affordable and accessible for all kids.

As we introduced the game, we also introduced a life skills curriculum that supported the development of Nine Core Values inherently found within the game of golf (honesty, integrity, sportsmanship, respect, confidence, responsibility, perseverance, courtesy and judgment).

This was a game changer –  for the kids, and for our organization.

Now, for over two decades we’ve been committed to helping kids build character strengths and important life skills through the game and providing all kids with access to opportunities for personal growth in a fun and safe environment.

While we began on golf courses, we expanded by bringing our program to physical education classes across the country through our in-school and after-school programs.