Harris English birdied the first play-off hole to beat Joaquin Niemann at the Sentry Tournament of Champions in Hawaii. 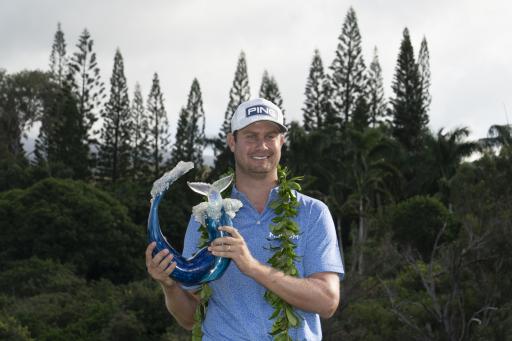 Harris English won his first PGA Tour event since 2013 after he beat Joaquin Niemann in a play-off to win the Sentry Tournament of Champions in Hawaii.

Niemann, just 22-years-of-age from Chile, produced an incredible 9-under par final round to climb the leaderboard and he almost entered double digits, but he missed his six-foot putt for birdie at the final hole, which would have won him the tournament.

English came close to winning the tournament at the last too, when he hit a beautiful drawing shot into the par-5 green, leaving a fairly short putt for eagle, but the American had to settle for a birdie to force a play-off.

At the first play-off hole, Niemann pulled his second left of the green and failed to get up and down for birdie, while English made no mistake with his birdie putt, rolling it in for his third PGA Tour title.

English and Niemann finished the tournament on 25-under par, one shot better than defending champion Justin Thomas, who shot a 7-under par final round but a mistake at the par-4 17th meant his birdie at the last wasn't good enough for a spot in the play-off.

English went into Sunday's final round with a share of the lead alongside Ryan Palmer, but both got off to a slow start whilst Niemann flew into contention, with Palmer eventually dropping into 4th place after only managing to score a 71.

Xander Schauffele and Sungjae Im shared 5th place at 21-under par, while Bryson DeChambeau, Jon Rahm and Collin Morikawa were all one shot further back.

NEXT PAGE: Social media reacts to Jon Rahm getting ANGRY at the Tournament of Champions!