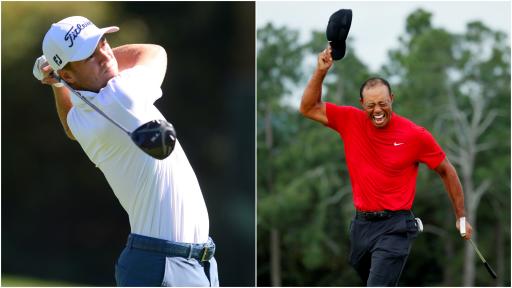 Justin Thomas has told the media he is sick to his stomach after learning Tiger Woods is being treated for injuries in hospital following a major car crash on Tuesday.

Thomas, speaking to the media over video ahead of this week's WGC-Workday Championship, admitted he was worried for his close friend Woods and also had concerns for his children Charlie and Sam.

Justin Thomas got emotional while reacting to the news of Tiger Woods’ accident. pic.twitter.com/7YC3TNzM0f

"I'm sick to my stomach," said Thomas. "It hurts to see one of my closest friends get in an accident and I just hope he's alright. I just worry for his kids, I'm sure they're struggling."

Los Angeles County Sheriff's Department confirmed in their post that Woods was "extricated from the wreck with the 'jaws of life' by firefighters and paramedics."

RELATED: TIGER WOODS INVOLVED IN MAJOR CAR CRASH AND BEING TREATED FOR INJURIES IN HOSPITAL

PGA Tour players, legends of the game, sponsors, and just about everyone else in the golf industry has been sending their best wishes to Woods for a speedy recovery.

Take a look at some of the tweets below:

Barbara and I just heard about Tiger’s accident, and like everyone else, we are deeply concerned. We want to offer him our heartfelt support and prayers at this difficult time. Please join us in wishing Tiger a successful surgery and all the best for a full recovery.

Jon Rahm is hopeful for the speedy recovery of Tiger Woods. pic.twitter.com/Ew7fLwJ3JP

. @tigerwoods, just seen the awful news. We know how tough you are, we’ve seen it a hundred times. Hoping and praying you’re ok my friend.

Thoughts are with @TigerWoods and others involved, wishing a speedy recovery and I hope the injuries are not bad

“Tiger Woods is part of the Augusta National family, and the news of his accident is upsetting to all of us. We pray for him, for his full recovery and for his family during this difficult time.” – Chairman Fred Ridley

Heartbroken and shocked to hear about @TigerWoods accident today. My thoughts and prayers are with him for a full recovery.

The PGA Tour said in a statement: "On behalf of the PGA Tour and our players, Tiger is in our prayers and will have our full support as he recovers."

Woods had told CBS Sports' Jim Nantz on Sunday evening that he was unsure whether he would be returning to action at The Masters in April. A large number of golf fans also noted that Woods did not look or sound particularly good during the interview.