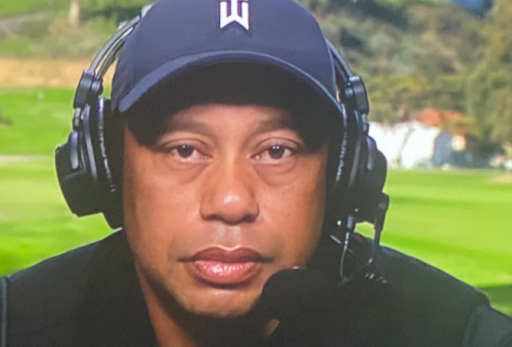 Tiger Woods has raised question marks as to whether he will even be in a fit state to compete at The Masters in April as he continues to recover from a fifth back surgery at the end of 2020.

UPDATE: TIGER WOODS WAS "AGITATED AND IMPATIENT" AND "TOOK OFF FAST" FROM HOTEL JUST MOMENTS BEFORE HIS CAR CRASH

Woods, the tournament host at this week's Genesis Invitational on the PGA Tour, was in the commentary booth speaking to CBS Sports' host Jim Nantz for a brief period during the final round, and it did not take long for the topic of Augusta National to reach the top of the agenda.

After discussing the tournament and giving his thoughts on some of the players in contention for the title, Nantz asked Woods how his recovery was going and whether he was confident of being able to tee it up in the year's first major in seven weeks' time.

"God I hope so, I've got to get there first," said Woods.

"A lot of it is based on my surgeons, my doctors, my therapists, and making sure that I do it correctly because this is the only back I've got, so I don't know how much wiggle room we've left here."

Nantz then said to Woods: "But the plan would be to get one more tournament in before that [The Masters]?"

Woods hesitantly replied: "I don't know what the plan is. The plan is to just go and get an MRI scan and to see if we are healed and then we can start progressing."

Nantz also asked specifically about Woods' golf game, and the former World No.1 just spoke about being able to putt.

"I lengthened my putter, I don’t have to bend over as far," said Woods.

"I’ve gone to the same length as my sand wedge. I do a lot of putting drills, blading the sand wedge so I figured, I do a lot with that why don’t I just lengthen my putter, so I did and it helped."

RELATED: TIGER WOODS HAS ADDED LENGTH TO HIS PUTTER

The 15-time major champion last played in a PGA Tour event back at The Masters in November 2020 when finishing tied 38th.

Woods then competed alongside his son Charlie at the PNC Championship in late December, just days before going on to have a fifth back surgery to remove a pressurised disc fragment.

After watching Woods appear on the broadcast, a number of golf fans were voicing their concern at how Woods looked and sounded less than two months before The Masters.

"Tiger looked so fed up right there," tweeted one golfer.

"Just me or did Tiger Woods just look completely zoned out during that interview?" tweeted another golf fan.

"He did not look in a good way it must be said," said one golf fan. "While he might compete at The Masters, I'd be very surprised if he makes the cut. Looks and sounds like he knows it could be the end now."

he looks and sounds like he knows this is his last go at it, doesn't he. Something quite sad about that segment. Those scenes from 2018 and 2019 were just miraculous. We'll look back and ask 'how?' just like we have done with the 2008 US Open.

"Tiger Woods looked absolutely fried in that interview just now," tweeted one golfer. "Bloated, dull looking face and sounded like he was speaking through a muffler. Honestly reckon this last surgery could be the end for him."

Another tweeted: "With all due respect, I don’t think golf misses him all that much anymore. His Masters win was fantastic but he’ll never be close to what he was. Looking forward to seeing him on the Champions Tour."

"I am not overhyped about what I just saw from the great Tiger Woods. Think maybe he’s been sleeping since December?"

NEXT PAGE: SHOOTER MCGAVIN WANTS HIM AND TIGER WOODS TO TAKE ON HAPPY GILMORE AND PHIL MICKELSON