Keegan Bradley hit an incredible shot on the final hole in his match with Adam Scott to secure a half-point at Austin Country Club. 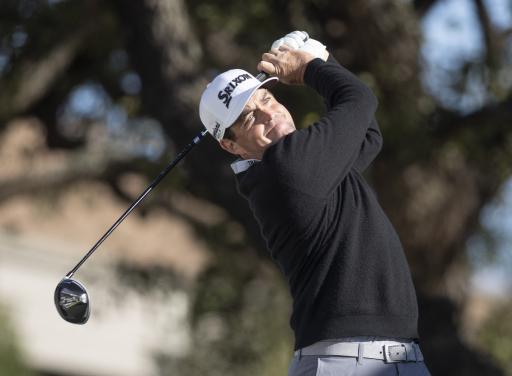 The former PGA champion was 1 down on the short 18th hole at Austin Country Club and he hit his tee shot right of the fairway and behind some tall trees. All seemed lost at this stage.

While Scott only had 50 yards left to the pin from the middle of the fairway, Bradley had 153 yards left with trees in his way. He had to get creative.

Bradley punched an iron through a gap in the trees. His ball bounded up the hill to the green, using the contours to the left of the cup, and his ball incredibly finished about three feet from the pin.

A stinger slice from the rough thru the trees @Keegan_Bradley makes an unreal birdie on 18 win the hole and earn a tie in his match against Adam Scott.

Scott could only hit his approach to 42 feet. Bradley won the hole and secured a half-point for himself. It felt like a loss for the Aussie no doubt.

Despite his heroics, Bradley has only earned 0.5 points in two matches with Scott and Jordan Spieth. This means that he has been eliminated from the competition.

Scott, who will be kicking himself, needs to beat Jordan Spieth in the third round of group matches on Friday to secure advancement to the last 16.

The 2013 Masters champion can get through if he ties, but this can only happen if Bradley wins or ties with Justin Rose in the final Group 11 match.

If both Spieth and Rose won on Friday, there would be a playoff to see who advances to the next stage. If Jordan Spieth beats Scott and Rose either loses or ties with Bradley, Spieth will advance.