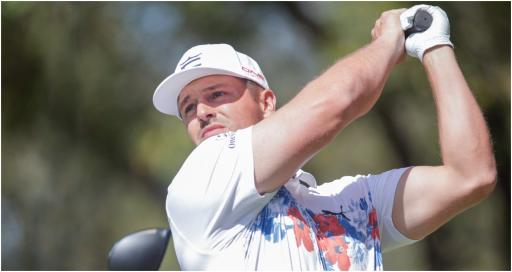 Lee Westwood says his victory over Bryson DeChambeau on the second day of the WGC Match Play "wasn't revenge" for Bay Hill.

DeChambeau memorably got the better of Westwood, 49, at the Arnold Palmer Invitational last season but today Westy had the last laugh.

Westwood managed to beat DeChambeau 1UP at Austin Country Club but had to withstand a late rally from DeChambeau.

The Englishman lost three consecutive holes on the back nine as the 28-year-old American levelled things up.

But Westwood made a clutch eagle at the par-5 16th to take command down the stretch.

He said when asked if it felt like revenge: "Oh, no, no, not at all. No. And I don't know the reason why.

"You just go out and you try and beat the guy in front of you regardless of what you've done against somebody in the past.

"Yesterday I had never even played with Talor [Gooch] before and I didn't really know much about his game, and then obviously I've played quite a bit with Bryson, and we had a chat going round, and I enjoy his company, so it was a good match to be involved in.

Paul Casey made it to the tee box for his match against Alex Noren. He waited for the Swede to hit his tee shot...then withdrew.

Casey had to withdraw after two holes yesterday with back spasms. He tried to get it sorted out with treatment but it was to no avail.

He said: "So the pain I'm feeling is lower back, left side, it's like spasms. And saw Jason [physio] in the truck yesterday and he said to me, I laughed out loud, he goes, "your glutes are not firing', which made me giggle.

"Purely it's a thing when you get to your 40s. But that's I guess what's causing the pain in the spasms up the back.

"I've had it, I've probably had this like four, five times in 20 years, but it's, so it's not an injury, it's just, what is it? Fatigue? Could be back from still [The] Players and the cold weather and all sorts of stuff and traveling.

"Jason was really good in the truck, I mean we did everything, the back's taped right now, it's heavily taped up right now. We did the ice and we did physio and we did heat.

"And I wanted to play today, but you just, you just saw it. I mean it's like, it hurt -- I was in there for a good hour this morning getting more treatment, hoping I could go, just tender on the putting green and then started to feel it on the chipping green and then couldn't get past a 9-iron, so.."

There's no quit in @TheSergioGarcia.

Garcia wins 3 of the last 5 holes to earn a tie in his match against Collin Morikawa. pic.twitter.com/Dxn1iOBYIP

Sergio Garcia managed to win three of his last five holes to tie against World No.2 Collin Morikawa.

The Spaniard did so with a miraculous shot...on a downslope...from the pine straw.

Garcia said: "Obviously I had a little bit of a rock behind my ball, so I had to get quite steep with a 52. When I hit it, the way it came out, as low as it came out, I thought it had a chance to get to the top, but unfortunately it didn't. Obviously I was happy with the shot that I hit there because it was not easy at all."

He was asked what he likes about the format.

His response? "I don't. I find it way more stressful than stroke play. It's definitely a mental battle. It's hard not to, I don't know, I find it more frustrating when I'm playing against someone, yeah, obviously looking at certain bounces and stuff like that, and it's like, how does it bounce that way?

"But maybe I'm a bit salty there, but happy to get another win anyway."

He was asked about his use of the Texas wedge, being back in Austin. Specifically, when should you use it?

"I mean, it all just depends on the shot," he said.

"It all depends on the shot, too, and how the grass is in front of you.

"If you've got nice grass that you can putt through, I usually putt. But obviously there's certain times where you can't.

He added: " I feel like the older I get, the more I putt from off the green, though."