Golf fans and some PGA Tour competitors had some strong criticisms for the 13th hole at Austin Country Club which is hosting the WGC Match Play. 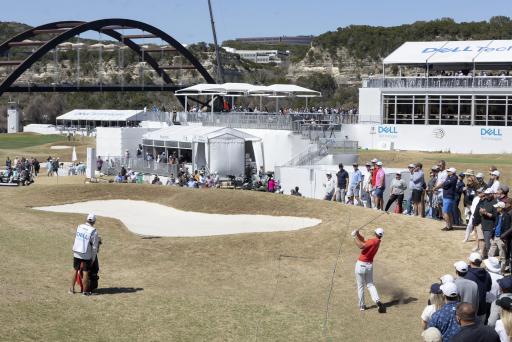 The 13th hole at Austin Country Club has been in the centre of a debate amongst golf fans and PGA Tour players and many of them aren't impressed.

This crucial par-4 on the back nine at the WGC Match Play is only 285 yards long which gives players the opportunity to drive the green with their tee shot.

But to the left of the fairway and the green, there is a large lake. It is the ultimate risk and reward tee shot that you can either lay up or go for.

Lee Westwood, who beat Bryson DeChambeau in his second group match on Thursday, complemented the hole but believes it can cause danger to spectators.

On the right of the hole, there are spectator tents in close proximity to the fairway and the green. Many tee shots have landed near or on the tents which have resulted in drops.

"The only thing I don't like about it is the danger to the crowd. Obviously, there are the tents there and there's the option to hit 3-wood off there or driver off there and just clatter it into those tents and then you get a dropout and a chip onto the green," said Westwood.

"Whatever it is, I can't figure it out. Something should probably be done about that. But I think it is a very good short par-4.

"That's the problem. You crash it into those right-hand stands, it endangers people and then you've got to drop in a good spot on the edge of the green."

With reference to the 13th hole, Tyrrell Hatton took issue with the lack of drop zones by the tents which means that players have to drop their ball far away from the green on a tight lie.

"It would be nice if there were some actual drop zones around where all the hospitality is, and (you) end up having to drop it in some stupid places," Hatton said after his second-round victory against Si Woo Kim.

"Having to go 100 yards back around to try and find a point to drop, when most places you would play there would be a drop zone nearby.

"I was on the fairway on 15 (after his tee shot), obviously you don't want to be there, but then I'm having to drop it on a point on a massive downslope, ball below my feet, wind may be off the left, maybe down. Yeah, it's not ideal."

On the other hand, some of the other players in the WGC Match Play this week think that the hole is a great feature for the unpredictable format this week.

The wind has caused havoc on this hole in the first two rounds of the event. Strong gusts have made it near impossible to drive the green and keep your ball on the putting surface.

Brooks Koepka, who has two wins out of two matches so far, said the 13th hole is "one of the best drivable par-4's" for match play, while World No.1 Jon Rahm believes it is a great hole.

For some of the viewing public, there have been contrasting opinions. We have chosen some responses from golf fans on social media below.

Guys flying the ball into and over the grandstand getting free drops while also using the structures as a backboard..if it wasn’t a pro tournament they’d be in a wholly different situation.

Has to be the worst hole on tour. If they could hold it, would be the best.

Awful hole, but in fairness it was blowing 100 straight downwind. Yesterday was worse with putting the ball in the water.