Keegan Bradley holed out from the middle of the fairway on the 9th hole to make an incredible eagle, on what was his last hole to share the lead with Sam Burns. 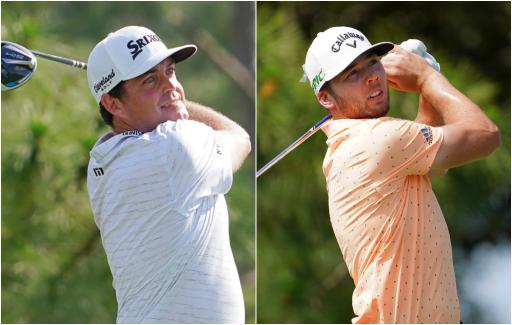 Keegan Bradley co-leads the Valspar Championship with Sam Burns heading into the weekend, after he holed an incredible shot from the fairway for an eagle at the par-4 9th hole, which was his last hole of the day.

The 2011 PGA champion was 10-under-par for the tournament before he made his eagle, building on the four other birdies that he'd made on his way to a 5-under-par 66 at Innisbrook Resort.

Bradley finished on 12-under-par heading into the weekend, alongside Burns who shot a great second-round score of 63 to put himself in the final group on Saturday.

The 24-year-old shot 4-under-par in his first round and he played some incredible golf on Friday, making eight birdies to card 8-under-par which was the lowest round of the day.

Burns, who turned professional in 2017, is yet to win on the PGA Tour in his career. His best finish this season was a tie for third at the Genesis Invitational in February.

2009 US Open champion Lucas Glover shot a 6-under-par 65 to finish on 8-under-par for the tournament. The 41-year-old made three birdies on both the back nine and the front nine to join fellow American Max Homa, just four shots behind the leaders.

Homa made his first-ever albatross in a social round on Tuesday and this proved to be a good omen, as the World No. 41 followed up his first-round 66 with a second-round score of 3-under-par to sit in tied third with Glover.

2016 Valspar Championship winner Charl Schwartzel is one of five players on 7-under-par in tied sixth. The South African agonisingly lost in a playoff at the Zurich Classic of New Orleans last week, so he will be looking to go one better here at the Copperhead Course.