Viktor Hovland has emerged as an exciting, young talent on the PGA Tour this season and he caught the eye again at the Copperhead Course this week. 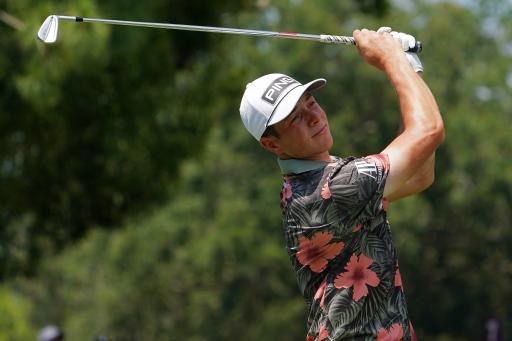 Viktor Hovland is becoming a player to look out for at the top of PGA Tour leaderboards, but it is not only his golf that has stood out at the Valspar Championship this week.

In both of his first two rounds at the Copperhead Course, Hovland caught the eye of golf fans by wearing two flowery golf shirts.

It is always refreshing to see golfers express themselves with their play and their dress, and it is fair to say this is exactly what Hovland has done so far this week.

The PGA needs more guys like him. DJ and JT are his polar opposite.

I really like Viktor. He is a cool guy with a big smile

Flowered shirts are a power play

he is the cutest, I just love him so much

The two-time PGA Tour winner followed up his first-round score of 69 with another round of 2-under-par on Friday, to finish on 4-under-par for the tournament.

Hovland made three consecutive birdies on the back nine of his second round at the Copperhead Course, showing glimpses that he could be in contention to win his third PGA Tour title this week.

His last win came at the Mayakoba Golf Classic in December 2020 and his first win on tour came at the Puerto Rico Open of the same year.

In September 2019, Hovland broke into the top 100 players in the world for the first time in his career after he finished tied 11th at the BMW PGA Championship.

Since then, the popular Norwegian hasn't looked back currently sits at 15th in the Official Golf World Rankings.