Kevin Kisner was in great form in his press conference on Wednesday at the Presidents Cup, discussing his own game, the football season and Adam Scott's good looks. 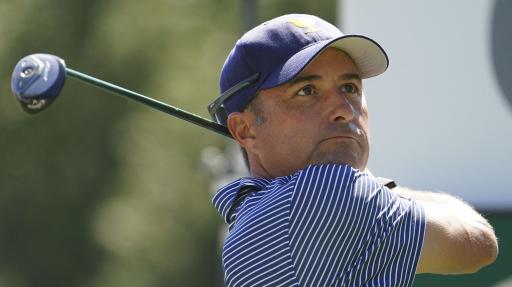 Kevin Kisner is certainly pumped and ready to play in just his second Presidents Cup at Quail Hollow. The chat was flowing and one-liners were rolling like clockwork on Wednesday.

Kisner, a matchplay specialist, was unbeaten on his sole appearance against the International team five years ago. He won a four-ball match and foursomes match with Phil Mickelson and he halved with Anirban Lahiri in the singles.

It is no shock that America won 19-11 on that occasion at Liberty National Golf Club in New Jersey. Despite being 15th in the US Presidents Cup rankings, captain Davis Love III chose the 38-year-old.

His expertise warrants a lot of confidence and excitement and this was on show on Wednesday when Kisner faced the media in North Carolina.

"I think just being on the team, having other people pulling for you that are genuinely pulling for you, and the camaraderie you get amongst guys you never get during a regular tournament week," Kisner said.

"We don't ever eat together that often or train together or hang out non-stop together with our wives. It's fun to do that here.

"It's going to be what it is. I'm going to dink it down the fairway and hopefully make a lot of putts to p**s people off - I'll be paired with any of these guys. Are you kidding me? What's the worst World Ranking, like 15? I can handle that with any of them."

College football has been the talk of the dressing room according to Kisner. The regular season started on August 27 and as much as the US team is determined to deny the Internationals just their second-ever win, they'll have their eye on the week 4 fixtures.

"It's non-stop. We're all talking about the lines this week. We watched football all night Monday night. Got some good games Thursday, Friday and Saturday.

"In 2017 I asked to sit out in the afternoon because Georgia played Tennessee. Strick (Steve Stricker) is like seriously? I'm like, yeah, man, that's my squad."

He was then asked about who he would want to beat in the Sunday Singles and Kisner earmarked Presidents Cup veteran Adam Scott. Not for competitive reasons, but for his looks.

As it so happens, Kisner beat Scott in the last 16 of the WGC Matchplay earlier this year. The Australian is playing in his 10th Presidents Cup this time around.

"You've got to beat Adam Scott. He's so damn good-looking. You've got to beat him up and then tell everybody how much better looking you are than he is - But then maybe all the hot chicks are watching your group.

"We want to bring all the good-looking girls to our group. We don't care. We're a welcoming party."