Despite a gutsy display from Trevor Immelman's International side, America secured a healthy 4-1 lead after the first day of the Presidents Cup at Quail Hollow. 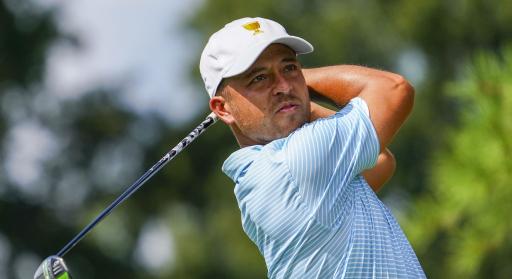 USA were heavy favourites heading into the first day of the Presidents Cup and despite hiccups on the back nine in each match, they lead the International team 4-1 in North Carolina.

Patrick Cantlay and Xander Schauffele set the tone with a crushing victory over Adam Scott and Hideki Matsuyama, who have now played in 15 Presidents Cups between them.

Si Woo Kim and Cam Davis epitomised the spirit shown by Trevor Immelman's Internationals with a vital win over Scottie Scheffler and Sam Burns, but the US tide was too strong and they take a three-point advantage into the Friday four-balls.

Cantlay and Schauffele, who picked up two points together at the 2019 Presidents Cup, got things underway with three birdies in the first six holes against Scott and Matsuyama.

They were 3 up through the first third of the round. The winners of the Zurich Classic of New Orleans in 2022 added birdies at the 7th, 11th and 12th holes to take a 5 up lead with six left. Scott and Matsuyama had just one birdie on their scorecard.

Schauffele sealed the deal with a par putt on the 13th hole to score the first point for America at the event that was delayed by a year due to the Covid-19 pandemic.

Although Spieth and Thomas led 3 up through their opening six holes, Im and Conners proved to be stubborn opponents. The International pair won the 7th and 9th holes to get back to 1 down at the turn.

Conners missed a crucial nine-footer to win the hole on 14. The Canadian was punished when Thomas holed a fantastic par putt from way out to win the 15th hole after Spieth's tee shot skipped out of the water hazard.

Im squandered another chance to win a hole back on the par-5 16th. They were dormie 2 down and the seasoned American pair eventually sealed the deal on the 17th hole as Im's long-range birdie putt to prolong the match missed.

What a turnaround from Si Woo Kim and @CamDavisGolf

Despite Tom Kim and K.H. Lee taking an early 1 up lead after two holes against Young and Morikawa, Love III's pair made birdies on holes 3, 6 and 9 to go 2 up at the turn.

The International duo provided another gutsy resistance on the back nine. Birdies on the 11th and 12th holes brought the scores level with six holes remaining.

America went 1 up with five left and on 17, Young nailed a 25-foot birdie putt to seal the deal on his Presidents Cup debut. America led 3-0 at this stage.

World No.1 Scheffler and Burns were all-square with Kim and Davis after two holes, but the US team controlled the front nine with birdies on the 3rd, 6th and 7th holes.

The pair, who contested the playoff at this year's Charles Schwab Challenge, was 2 up after nine holes. Kim and Davis hung in there and won the par-4 15th hole with a par. They added a birdie on the 16th to make things all square with two to play.

Davis, making his event debut, hit a stunning approach on the par-4 17th hole to gimme-range to take the lead for the first time in the match. The Internationals won their fourth hole in a row on 18 to secure a stunning win over a strong American pair.

Since the start of last season, Homa and Finau have won five times between them on the PGA Tour and they largely controlled the anchor match on Thursday until the latter stages.

America were 2 up after seven holes but Taylor Pendrith and Mito Pereira birdied the par-4 8th hole to cut the deficit to 1 down. The Internationals added a birdie on the 13th hole to square things up.

Pendrith holed a huge 24-foot par putt on the 16th hole to keep the match all-square. However, the rookie from Ontario missed a 10-foot putt to save a half for Immelman's brave side on 18. The final score on day one was 4-1.

S. W Kim and C Davis 2 up vs S Scheffler and S Burns