Kevin Kisner: What's in the bag of the Wyndham Championship winner?

Kevin Kisner came out on top in a six-man playoff to win the Wyndham Championship on Sunday. 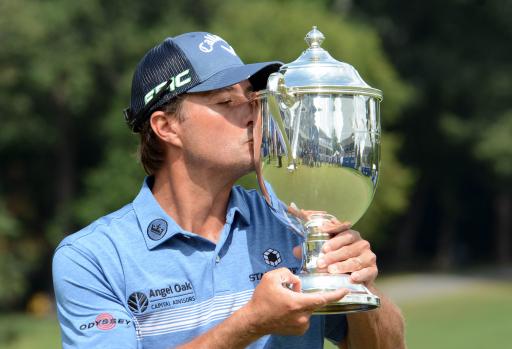 Kevin Kisner has now won four times on the PGA Tour after he came out on top in a six-man playoff at the Wyndham Championship.

Before the final round at Sedgefield Country Club, Kisner had lost all five of his previous playoff appearances on tour, but a birdie at the second playoff hole was enough to see off the rest of his opponents.

The 37-year-old was four shots behind leader Russell Henley at the beginning of the day on 11-under-par and the experienced American started with four birdies in his first six holes.

Kisner made crucial birdies on the 16th and 17th holes to post 15-under-par and join Si-Woo Kim, Roger Sloan, Adam Scott, Kevin Na and Branden Grace in the playoff which equalled the PGA Tour record for the number of competitors.

Scott had a fantastic opportunity on the first playoff hole to win his 15th PGA Tour title, but his putt from four feet rolled over the lip on the 18th green.

Kisner stepped up to the plate on the second playoff hole, again played on the 18th, as he arrowed his approach close to the hole and his birdie was enough to complete his first victory since the 2019 WGC-Dell Technologies Match Play.

Kevin Kisner: What's in the bag?