Last week, PGA Tour player Grayson Murray criticised Kevin Na for slow play on Twitter, so Na fired back with a response that made many people laugh. 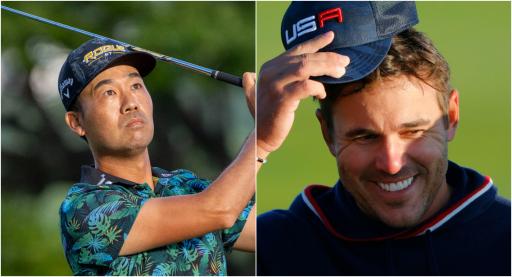 Kevin Na revealed that many people from the world of golf, including Brooks Koepka, enjoyed his response in a Twitter spat with fellow PGA Tour player Grayson Murray.

Speaking to SiriusXM PGA Tour Radio, Na said that other players and caddies from the PGA Tour sent him messages complimenting his response to Murray.

An initial tweet by Chantel McCabe read: "Kevin Na walking in putts does not get old," to which Murray replied with a derogatory comment about the 38-year-old's slow play.

Na replied with: "u missing the cut is getting old!" Murray is currently taking a break from golf to focus on personal issues. In the 2020/2021 season, the World No. 662 made just six cuts in 22 events.

Na clearly felt that a sharp response was needed and he has received high praise for it, it seems.

"It was amazing how many players and caddies came up to me and complimented me - not on my round but my tweet," said the five-time PGA Tour winner.

"I’ve had some big boys telling me how good it was. Even Brooks Koepka messaged me saying how good of a tweet that was.

"I had an idea people were going to laugh because (before) I tweeted it - my caddie Kenny Harms was next to me - I said, ‘Look at this idiot. I said, ‘Watch this,’ and I showed him, and he was laughing pretty hard."

Na was the defending champion at the Sony Open last week, but despite his good start with a 61 in the first round, he could only manage tied 20th at Waialae Country Club.

Nonetheless, the experienced American is in fine form at the moment. He and his partner Harris English picked up a win just before the turn of the new year at the QBE Shootout in Florida.

Na also told SiriusXM PGA Tour Radio that someone had compared the Twitter exchange with Murray to the feud between Koepka and Bryson DeChambeau, but he was quick to play down the magnitude of the spat.

"Somebody mentioned, ‘Oh, is this the duel like we had with Bryson and Brooks?' I said, first of all, he’s not even on tour; you have to be somebody good to make this worthwhile and make money out of this match," Na added.

"Me... maybe I can create a buzz, barely; I’m not a major winner, you know, I’m maybe an above-average player on Tour. And who’s this guy? Nobody cares, that’s the sad part."