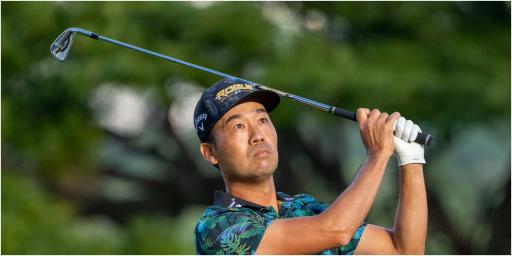 Kevin Na came under some criticism at the Sony Open this week for what was deemed by some as slow play on the PGA Tour.

Granted, Na was on 59-watch in the first round as he went flag hunting in gorgeous Hawaii as he seeks to defend his title.

Grayson Murray, 28, who has previously detailed his issues with the PGA Tour over his lack of help for alcoholism, decided to take aim.

Murray decided to quote tweet Chantel McCabe when she posted that watching Na walking in putts "never gets old".

Related: Why Kevin Na got so emotional after QBE shootout win

He felt the need to say:

A general rule of thumb is if you can dish out the criticism then you should be prepared to take some back headed your way.

Of course, Na wasn't going to just accept this and had some venom of his own.

Na, 38, who has won five times on the PGA Tour, decided to respond in kind:

Somebody please call an ambulance for grayson here

Game, set and match to Na?

His fellow tour professional Byeong An saw the funny side of it and asked if an ambulance could be sent for Murray.

Of course, Murray had to respond:

If they penalized you like they should for slow play you’d never make another cut either. https://t.co/6oY80JrEDy

What do you think? Was Na taking too long or is it just par for the course?

There is no doubting that at times players do take quite a long time.

Perhaps the tour bosses do need to clamp down on those who are playing a bit too slowly.

"Charge players $500 every time they call a rules official over for a cart path or sprinkler drop," he joked.