Phil Mickelson issues apology over controversial PGA Tour and Saudi Golf League comments as KPMG confirms they have cut ties with him. 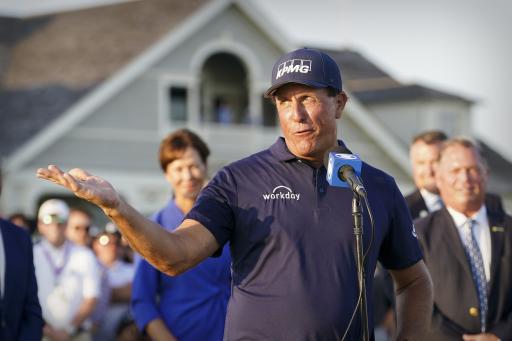 KPMG, the large US audit, tax and advisory firm, have today confirmed their sponsorship deal with Phil Mickelson has ended by "mutual agreement".

Mickelson, who last year became golf's oldest major champion with victory at the US PGA Championship, first partnered with KPMG back in 2008 and he has worn a KPMG-branded hat on the PGA Tour ever since.

Received the statement below from @KPMG_US confirming that they have ended their longtime partnership with Phil Mickelson. pic.twitter.com/ASytnF1Atb

While financial terms of his endorsement deal were never released, Forbes magazine once revealed Mickelson received over $30 million each year from his sponsor deals that included KPMG and his current equipment manufacturer Callaway.

In 2017, Mickelson confirmed he would be extending his equipment deal with Callaway throughout the rest of his golf career, having partnered with the brand ever since 2004.

"KPMG U.S. and Phil Mickelson have mutually agreed to end our sponsorship effective immediately," reads an email from KPMG. "We wish him the best."

Mickelson’s statement, received about the same time as KPMG’s announcement, said he has given his partners the option to pause or end their relationships "as I understand it might be necessary given the current circumstances."

The split comes off the back of Mickelson's controversial remarks he made about the PGA Tour and a new Saudi Golf League to golf writer Alan Shipnuck back in November (although they were only made public last week).

In those remarks, Mickelson said he had "a once in a lifetime opportunity to re-shape the PGA Tour".

A Statement from Phil Mickelson pic.twitter.com/2saaXIxhpu

Most damaging, however, Mickelson called the Saudis "scary motherf***ers" and suggested that their money had finally given him and the players leverage.

Those particular comments drew derision from the golf world and his fellow players, with Rory McIlroy describing the six-time major champon as "naive and ignorant."

Mickelson took to social media on Tuesday night to apologise for his words to Shipnuck, who is writing a biography on Lefty due out in May.

NEXT PAGE: ALAN SHIPNUCK NOT HAPPY ABOUT PHIL MICKELSON'S "OFF RECORD" COMMENT IN APOLOGY