"Not once in our texts or when we got on the phone did Mickelson request to go off-the-record," confirms Shipnuck. 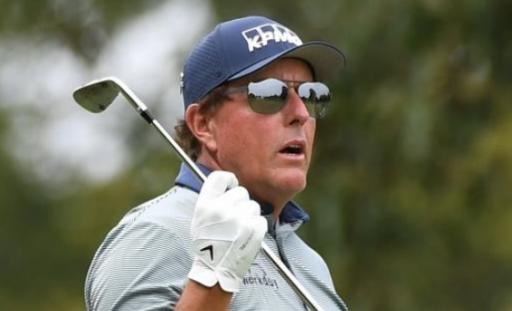 Alan Shipnuck has now revealed exactly what Phil Mickelson text him on the morning that his controversial remarks were made public last week.

Mickelson, 51, sent shock waves through the golf world in comments he made to biographer Shipnuck.

Shipnuck has been writing a book entitled "Phil: The Rip-Roaring (and Unauthorized!) Biography of Golf's Most Colorful Superstar".

The renowned golf journalist states he had a phone call with Mickelson last November as he was putting the finishing touches on his book where Lefty explained his position with the PGA Tour and its commissioner Jay Monahan.

This is the muthah of all #AskAlans, as I go deep on all things Phil. To be clear, our interview was on-the-record, and a deeper explanation is at the top of this column. https://t.co/njPPS1MwMh

Shipnuck, who interviewed more than 200 subjects for the book, claims Mickelson told him that he didn't pretend to be excited about "hitching his fortunes to Saudi Arabia".

These comments were made back in November but only made public last week.

In such remarks to the author, Mickelson said he had "a once in a lifetime opportunity to re-shape the PGA Tour".

Most damagingly for golf's oldest major champion, he called the Saudis "scary motherf***ers" and suggested their money had finally given him and the players leverage.

His comments quickly drew derision from the golf world and his fellow players, with Rory McIlroy describing him as "naive and ignorant".

Mickelson has since apologised on social media but has lost a sponsorship deal with KPMG in the process.

RELATED: MICKELSON APOLOGISES FOR COMMENTS, TAKES AIM AT SHIPNUCK AND ADMITS HE NEEDS TIME AWAY FROM THE SPORT

Shipnuck has now taken to the Fire Pit Collective to reveal exactly what Mickelson messaged him after seeing what had gone public last week.

He has answered a number of questions in his #AskAlan Phil Mickelson Edition.

The most notable response was made to fellow golf scribe Geoff Shackelford, who asked Shipnuck: "Have you heard from Phil?"

"He [Phil Mickelson] sent me a text on the morning the excerpt dropped," writes Shipnuck.

"He was less than thrilled. Just as in the statement he released on Tuesday afternoon, Mickelson made a half-hearted attempt at revisionist history, trying to say our talk had been a private conversation, but I shut that down real quick.

"He knew I was working on a book about him and asked to speak, saying he wanted to discuss media rights and his grievances with the PGA Tour, both of which inevitably lead back to Saudi Arabia.

"If the subject of a biography phones the author, the content of that conversation is always going to inform the book, unless it is expressly agreed otherwise.

"Not once in our texts or when we got on the phone did Mickelson request to go off-the-record and I never consented to it; if he had asked, I would have pushed back hard, as this was obviously material I wanted for the book.

"Mickelson simply called me up and opened a vein. To claim now that the comments were off-the-record is false and duplicitous."