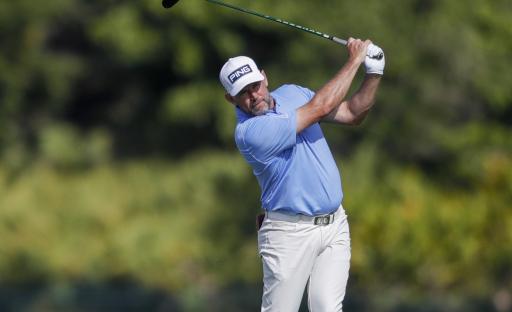 Lee Westwood lept to the defence of his friend and WGC Match Play opponent Richard Bland after a golf reporter posted a derogatory tweet about him on social media.

Bland, 49, has only one win to his name on the DP World Tour and at one stage in 2019, he was still playing on the Challenge Tour.

Now, he has come through his group at one of the biggest PGA Tour events in the schedule to face former World No.1 and two-time major champion Dustin Johnson in the last 16.

You do fully qualify as a ! https://t.co/JNuN7h5goI

Many golf fans didn't like this tweet and felt it was offensive to the Englishman, who is ranked number 60 in the world. Another man who didn't like it was Westwood.

"You do fully qualify as a bell***," Westwood responded. Unfortunately for the 25-time DP World Tour winner, it was he who Bland beat on Friday to reach the last-16 at Austin Country Club.

The back and forth continued. As you can see in the tweet below, Beall then blocked Westwood on Twitter. "Did I touch a nerve?" said the 48-year-old.

Westwood finished the evening with one final tweet: "If you get beat fair and square you just hold your hands up and say well played @blandy73. Some people like @JoelMBeall can’t accept that.

"He’s grafted his balls off to get to here! Accept it and move on @JoelMBeall good luck tomorrow against @DJohnsonPGA may the best man win."

There will be many players from the DP World Tour rooting for Bland on Saturday morning and Westwood will certainly be one of them.

Johnson, who won the WGC Match Play in 2017, earned maximum points in Group 8 after beating Max Homa on Friday.

Next Page: Tyrrell Hatton fuming as group behind HIT THROUGH HIM at WGC Match Play