Tyrrell Hatton and his opponent Daniel Berger were on the 13th green at the WGC Match Play when Christiaan Bezuidenhout and Si Woo Kim tried to hit through them. 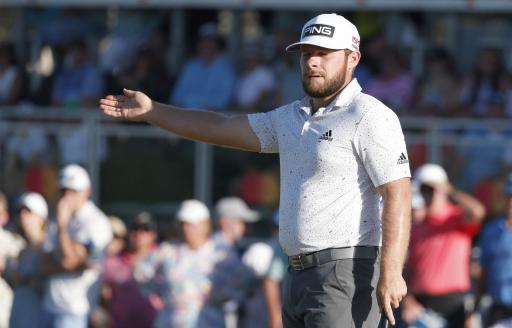 Tyrrell Hatton was extremely unhappy that Christiaan Bezuidenhout and Si Woo Kim attempted to drive through him and Daniel Berger during the WGC Match Play on Friday.

Hatton and Berger were on the 13th green, a driveable par-4, and at this stage, Hatton was 1up and on his way to securing maximum points in Group 13.

When they were on the green, Kim hit his drive into the grandstand but Hatton told the media after his match that if the grandstand wasn't there, there was every chance the ball could've gone near them.

Also, Bezuidenhout teed off, with no shouts of FORE according to the Englishman, but he pulled his tee shot into the water to the left of the green.

"Si Woo had teed off prior and if his hadn't gone into the grandstand right then that would have pitched on, that would have landed on the green when we were there," Hatton said after his 2 up win over the American.

hitting driver into the twosome of Daniel Berger and Tyrrell Hatton seems like a really bad idea pic.twitter.com/GUhkzHMX4x

"It felt like a long morning for everyone. But I still don't think that you should be hitting up when it's clearly a reachable par-4. Obviously, Christiaan's just pulled his a little bit, but it didn't cover.

"But Si Woo hits it further than him and, yeah, I mean, I don't think it was great of them to hit up while we were there.

"I saw Daniel was kind of just about to go through his routine and hit his putt and I said, like, Hey, wait a second, Christiaan's now hitting.

"Oh, yeah, I mean if that was coming towards us and they hadn't shouted "fore", I mean, there was going to be some serious problems there. Even if it missed us all it's not the right thing to do."

Hatton and Berger spent a long time on the 9th green deliberating where Hatton's ball had crossed the penalty area. His approach to this par-4 went into the native area.

The man who now faces Seamus Power in the next round suspected that the frustration from the group behind may have stemmed from this.