World No.1 Jon Rahm will play Brooks Koepka in a mouthwatering tie in the last 16 of the WGC Match Play as both came through their group stage ties. 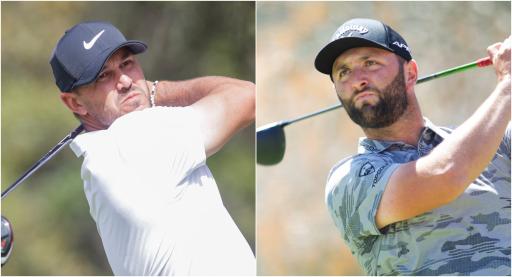 Jon Rahm and Brooks Koepka will play in a mammoth match in the last 16 of the WGC Match Play on Saturday morning after both players advanced from the group stages.

Despite Rahm losing 3&2 to Patrick Reed on Friday, he still got through Group 1 as Cameron Young was beaten by Sebastian Munoz.

Koepka made it a clean sweep of group victories at Austin Country Club. He beat Shane Lowry 1 up to win three points out of three in Group 16.

With five major championships and 14 wins on the PGA Tour between them, we are set to see a titanic clash between the current World No.1 and the former World No.1.

Scottie Scheffler beat Matthew Fitzpatrick in a playoff to set up a last-16 tie with Billy Horschel in what is a repeat of the WGC Match Play final in 2021.

After the recent two-time PGA Tour winner beat Fitzpatrick 5&4 in their final match of Group 5, both players finished on two points after three group matches.

Scheffler, who lost in the final of this event in 2021, beat the Englishman on the 6th playoff hole with a birdie to finally put the tie to bed.

Richard Bland beat his old friend Lee Westwood 2&1 on Friday to set up a daunting, challenging tie with two-time major champion and former World No.1 Dustin Johnson in the next round.

After Will Zalatoris beat Viktor Hovland 1 up in the final match of Group 3, the American then beat the Norwegian on the second playoff hole to reach the last 16. Both had accumulated two points each in the group stage.

In total, there were four playoffs to decide the outcome of the group stages. Takumi Kanaya and Kevin Na were two other players to reach the last 16 in this fashion.

Will Zalatoris vs Kevin Na