Long Driver tries to emulate Bryson DeChambeau but ends up SMASHING HIS FACE!

Golfers will do anything for a bit of extra speed - even smashing their head on an exercise bike. 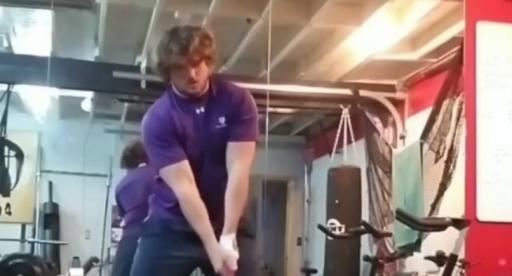 Golfers will do anything for a bit of extra speed like Bryson DeChambeau in 2021, even if it means clattering their head into an exercise bike down the gym.

Unfortunately that's exactly what happened to Ben Raymond, who has competed a few times at the World Long Drive Championships.

With several puffs of the cheeks, the long driver unleashes into his swing speed stick a little too strongly and follows through, smashing his head on the bike in front of him.

The video was posted on Instagram by our good friend Bobby Bradley at Long Drivers.

CLICK HERE TO WATCH OUR REVIEW OF ROYALTY SPORTS

DeChambeau was seen reaching 213mph ball speed during a recent driving session during his off season at Albany, Bahamas, home of the Hero World Challenge presented by Tiger Woods that tees up once again on the PGA Tour in December.

The big-hitting American was spending some down time with the man in charge of Long Drivers, Bradley, who is also the founder of Royalty Sports.

RELATED: "WILL A GREEN JACKET FIT OVER THOSE GUNS?" BRYSON RESPONDS

He was also spotted on a FaceTime with former US President Donald Trump yesterday.

Golf news
WATCH: Could you play the Phil Mickelson BACKWARD FLOP SHOT like this?
Golf news
A 14-year-old golfer just MADE THE CUT on the Asian Tour
Golf news
PGA Tour pro comes to the DEFENCE of golfer with a UNIQUE swing and dress sense
Golf news
Fostered girl, nine, is on her way to The MASTERS for the Chip, Drive & Putt
Golf news
DEBATE: Just how bad is slow play at your club? "It's CONTAGIOUS everywhere!"