Louis Oosthuizen finished second in yet another major championship at Kiawah Island, but unfortunately, he suffered a bit of embarrassment after the tournament. 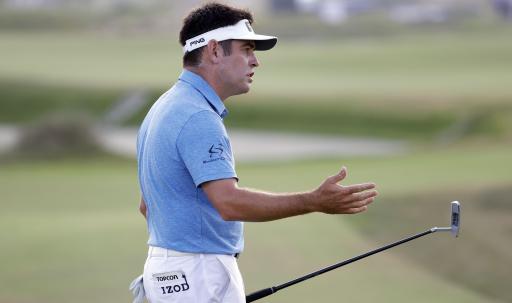 Louis Oosthuizen had another agonising week at a major championship last week, as he finished tied second at the PGA Championship at Kiawah Island.

Oosthuizen finished two shots behind Phil Mickelson, who made history by becoming the oldest major winner in golf history at the age of 50.

But after his round, the South African suffered a bit of embarrassment when a tweet was posted on his account on Sunday with the wrong picture included.

As you can see, the post congratulated Phil Mickelson on his landmark victory and was accompanied by what was meant to be a picture of the 2010 Open champion, but it was in fact, Joaquin Niemann.

As you can expect, many golfers will have social media managers to post online and keep their fans updated on their personal news. But on this occasion, whoever posted this for Oosthuizen made an error and the tweet was taken down.

The 38-year-old is not the first player on the PGA Tour to fall victim to this sort of mistake on social media. A very similar thing happened to Bryson DeChambeau in recent weeks.

At the beginning of the month, Sam Burns won his first-ever PGA Tour title at the Valspar Championship. It was a superb performance by Burns who had to fight off Keegan Bradley on his way to victory.

However, a picture of Burns with the trophy in a celebratory tweet was posted on DeChambeau's Twitter account by mistake. It was taken down immediately but it didn't take long for golf fans to pick up on the mistake.

These mistakes have conveniently come in the inaugural season of the Player Impact Program, where players are rewarded for their engagement and interaction on social media.

Due to these mistakes, maybe players on the PGA Tour will consider taking more control of their social media accounts if they are to reap the rewards of the program.

NEXT PAGE: THE BEST NIKE GOLF DEALS ON OFFER FOR THE 2021 SEASON