Matt Kuchar is using a RIGHT ARMLOCK at the 3M Open! 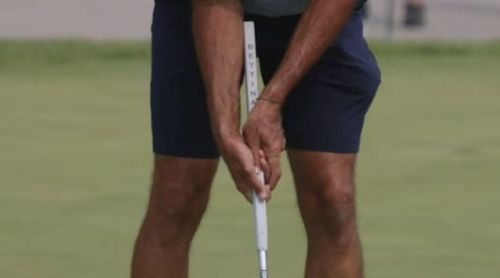 Kuchar, 43, has adopted an armlock putting method up his left arm for a number of years on the PGA Tour, but judging by a series of snaps from GolfWRX today, it would appear he has now switched to wedging the putting up his right arm instead.

While armlock putting has become a popular method with professionals and amateurs alike, we have never seen a right-handed player decide to wedge the grip up the right arm. It's usually up the leading left arm in the stroke.

According to GolfWRX, who posted the image of Kuchar on the practice putting green at TPC Twin Cities, the nine-time PGA Tour winner is testing a putter with "zero loft".

"Certainly didn't tip anyone for the lesson," said another.

Bryson DeChambeau and Webb Simpson are just two other players on the PGA Tour to use the armlock putting method, but with the grip up the left arm. Xander Schauffele has also been dabbling with the stroke in recent weeks.

The anchored putting ban, which stopped players from anchoring the putter into their bodies, came into effect in January 2016.

Some critics consider the armlock putting method should have been included in that ban, as the putter grip is wedged up against the arm, but as it stands the stroke remains legal in all forms of competition.

"The only thing that should be touching your club is your hands," wrote one golf fan. "Anything else is cheating."