Phil Mickelson hopes to secure a spot at this year's Ryder Cup at Whistling Straits. 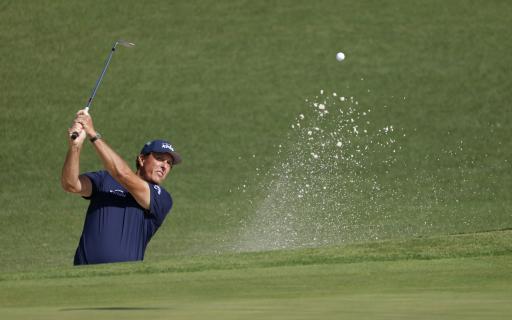 Phil Mickelson believes he's made "good strides" in his game over the past few months which he hopes will help him secure a spot at this year's Ryder Cup at Whistling straits.

This week, Mickelson is playing in The American Express in California where he is the tournament host and the 50-year-old is hopeful of some solid performances over the next few months to get the ball rolling, but he has a back up plan if things don't quite go his way.

"If I don't play well early on (in 2021), I'll start to re-evaluate things and maybe play a few more events on the Champions Tour, because what's fun for me is competing, getting in contention and trying to win tournaments," he said on Wednesday.

Mickelson may have won twice on the Champions Tour, but his PGA Tour performances in 2020 were disappointing, with just three top 10 finishes and 18 missed cuts.

He has slipped to 66th in the world rankings, but Mickelson insists his hard work and shorter winter break have put him in a steady position for a more successful year in 2021.

"I've actually had a good offseason where I haven't had as much time off as I normally would take because it's been so much shorter," he said.

"I feel like I've made a few good strides and I'm excited to start the year and see if I'm able to continue playing at the highest level.

"If I am, I'm going to really try to play more events on the PGA Tour and make a push hopefully for the Ryder Cup."

Mickelson is currently way down in the pecking order in the United States Ryder Cup standings, with the five-time major champion currently in 38th, meaning a string of good performances will be required if he is to get himself back in the picture.

"I've made some strides in my game," he said. "I'm excited to start the year and see if I can play at the highest level like I expect to.

"My love of the game of golf is extremely high and my desire to compete and play against the best players is high, and so I find myself just internally motivated because of my love to compete and my love to try to bring out the best in me," he said. "I'm trying to find the right balance."

NEXT PAGE: Golf fans IN AWE of European Tour video showing Rory McIlroy at the range