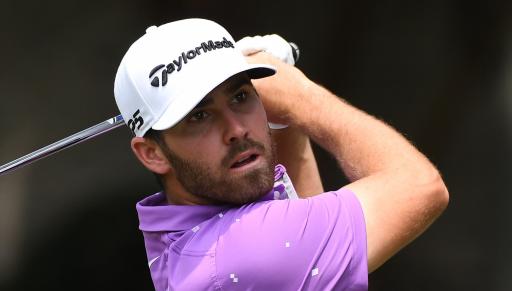 Matthew Wolff may have missed the cut at the Wyndham Championship last week, but the American still walked away with the second biggest pay cheque at Sedgefield Country Club on Sunday.

The challenge saw players take their best two scores on a desginated hole each week of the PGA Tour season.

Wolff finished the challenge with a -1.048 scoring average on the challenge holes, with Kevin Na, who lost out in a six-man playoff to Kevin Kisner on Sunday evening, finishing in second on -.935.

RELATED: HOW MUCH THEY ALL WON AT THE WYNDHAM CHAMPIONSHIP

His prize of $1 million fell just $100,000 shy of what Kisner picked up for clinching the Wyndham Championship.

"There’s a lot of money to be made out on Tour, but I’m new out here and every little bit helps," said Wolff.

"Just happy that I got it done. And I knew about it kind of the last couple months, so on the Aon holes I was a little more nervous than I usually am, but played them pretty well and just came out on top."

MILLION despite missing the cut at Wyndham Championship" />

Despite ending 2020 with some promising finishes, highlighted by a runner-up at the US Open, Wolff has endured a fairly dismal campaign since with just two top-20 finishes in 2021.

However, Wolff enters this week's first event of the PGA Tour FedEx Cup Playoffs Series at the Northern Trust in 59th place in the standings.

He will need to ensure a solid week as the top 70 players in the standings will progress into next week's BMW Championship, with then the top 30 players heading into the season finale for the FedEx Cup at the Tour Championship.