Doug Barron won the Shaw Charity Classic by two shots and joyfully celebrated what was his second win on the PGA Tour Champions. 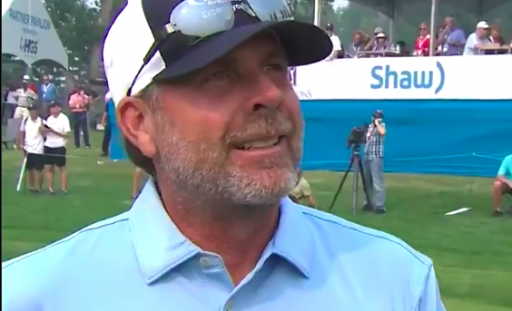 Doug Barron birdied his final three holes at Canyon Meadows Golf and Country Club to seal his second win on the PGA Tour Champions at the weekend and proceeded to give one of the most memorable winning interviews we have seen in years.

On a competitive Sunday afternoon in Calgary, Alberta, Barron fought off Steve Flesch and Billy Andrade to win the event by two shots.

On the final green, he two-putted for a great birdie and while his ball was on the way to the hole, he began celebrating. He continued his ecstatic reactions after he rolled his ball in to finish his round.

He could not contain his emotions as he was so delighted with his victory. He celebrated with his caddie and ran around the green like a young, excited child.

If you missed Doug Barron's interview after winning @ChampionsTour, it was one we won't soon forget. pic.twitter.com/l5876JOi0C

After he finally gathered himself together, he did a victory interview on the final green in which he accidentally swore while discussing his play in the final round.

Having shot three rounds of 64 on his way to the title, he was extremely pleased with the way he played and he continued to engage with the crowd and encourage them to cheer during his interview.

If anyone is familiar with the world of WWE and wrestling entertainment, you may have heard of the legendary wrestler Ric Flair. Flair has been an icon in the WWE world for a number of decades and is known for his cries of 'WOO'.

It seems that Barron is very much familiar with Flair's antics in the ring and as he was being interviewed after his round, he let out a 'WOO' or two to the crowd around the green.

This footage really is fantastic and although he may have used some fruitful language, it is great to see a player like Barron who is so passionate about our sport and winning tournaments.