Max Homa constantly ignored Kevin Kisner on Facetime - but for a good reason...

Soon after the Presidents Cup, Max Homa's wife Lacey was on the verge of giving birth to their first child, which was somewhat lost on Kevin Kisner... 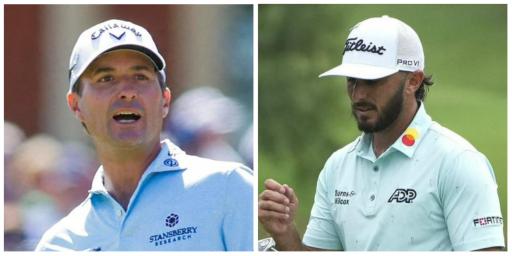 Max Homa and Kevin Kisner will partner up again at the QBE Shootout this week at Tiburon Golf Club, aiming to improve on their finish of tied fifth 12 months ago.

"I just felt the vibes from last Sunday a year ago. We played so well and got robbed, so I felt like right when I stepped foot back on this place, I was like this is our year," Homa said in a session with the media on Wednesday.

After opening their campaign last year with a 59, Kevin Na and Jason Kokrak proved too difficult to beat as they finished one shot ahead of Sam Burns and Billy Horschel. Both of these players now belong to the LIV Golf Series.

Homa and Kisner also spoke about the Presidents Cup yesterday in Florida. The pair contributed 4.5 points between them (0.5 points from Kisner) to America's five-point win over the Internationals at Quail Hollow.

The QBE Shootout is an event of its own kind on the PGA Tour schedule. It is 54 holes and features the scramble, greensomes and better-ball stroke play formats in rounds one, two and three respectively.

Kisner, a match play specialist and four-time winner on the PGA Tour, was delighted to see Homa make such a strong debut at the Presidents Cup, especially as it came shortly before his wife Lacey gave birth to their first child, Cam.

If @K_Kisner is calling, you answer.

Even if your wife is in labor pic.twitter.com/2Xt8dhCxJo

Homa's stress and devoted attention to Lacey was lost on Kisner as the 38-year-old admitted his confusion as to why Homa wasn't answering his FaceTime calls in the weeks after the Presidents Cup. Homa had a lot on his plate at the time.

"I had a good time watching Max be so excited to be on the team and represent the country, and for him to shine, like he played incredible up there all week so that was cool," Kisner said.

"Then to see his wife was nine months pregnant and see how excited he was about being a dad, what is that, about 10 days, two weeks after that?

"I kept FaceTimeing him on a Saturday when he wouldn't answer and I was getting pissed and I didn't know why he wasn't answering. He's like, 'All right, bro, Lacey's in labour'. I was like, 'Oh, that's why you haven't answered'.

"It was like midnight the first time we got there and Kev's like, 'Hey, my buddy's got something to say'," Homa added.

"And he's telling me I'm cheap because I got Elijah Craig as a gift for the Presidents Cup team members. I was like, 'Hey, so I'm like currently watching Lacey push. How about we wait until tomorrow?'"

There's no doubt Kisner is aware of the stresses that come with having children. He and his wife Brittany have three of their own and they also run their own children's charity called the Kisner Foundation in South Carolina.