Tiger Woods and his 13-year-old son Charlie Woods have now conducted their first ever joint interview with Notah Begay III. 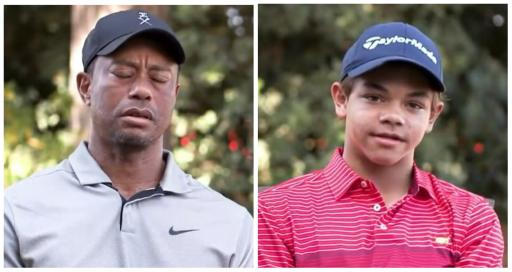 Tiger Woods has given an insight into watching his son Charlie Woods chase his dreams in their first ever joint interview.

Woods, 46, and Charlie, 13, gave the interview to one of the big cat's oldest friends in the game: Notah Begay III.

The duo's chat was filmed a few weeks ago after Charlie competed in the Notah Begay III Junior National Golf Championship.

It was broadcast on Wednesday and aside from dad Tiger forgetting his putter a few times, it appears Charlie approved of his father's caddying performance.

"I just want him to enjoy whatever he's doing. I'm supporting him wherever he wants to go, and obviously providing opportunities for that direction. As a parent our job and responsibility is to provide opportunity and support. It's been fun that he's taken a passion to something that I've enjoyed."

Charlie - who was filmed last week having zero interest in JT's banter - qualified for the tournament having shot his best ever round of 68.

Charlie said of his performance:

"The biggest thing was just clean up the big numbers. That's the main thing. Get the misses tighter, practice more. Just have fun."

"He forgot my putter a few times. That's really it."

"It's hard to describe, because it's so amazing to be able to be with Charlie out there and fight through it together and do it as a team. Just the fact that he earned his way into the event by shooting the lowest round he's ever shot. To go out there and play the way he did. Obviously, lots of lessons learned but I think overall the big picture is he thoroughly enjoyed it. It was a lot of fun for both of us."

Tiger Woods had arguably the greatest junior career in Golf history. Tiger commenting on how and why the competition is so much better today that when he played. Don’t miss the @Short_Par4 @nb3jgnc presented by @Realty1NM @Coushattaresort 7pm Wednesday & Thursday on @Golfchannel pic.twitter.com/QMuNMzMje1

When the interview was over Tiger turned to his son and said: "Proud of you buddy."

That line would cause the coldest of hearts to melt.

Related: Why Tiger wants to get in Charlie's head

Tiger and Charlie will be back in action at the PNC Championship at Ritz-Carlton Golf Club for the third time over 17-18 December.

Last year the big and little cat finished second and produced a remarkable Sunday run, combining to shoot a 59 in Woods' trademark red and black combo.