The young English pro is in contention this week off the back of a very good season on the Korn Ferry Tour. 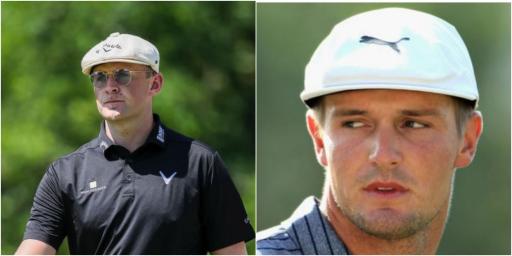 If you've never heard of Harry Hall before then you could be forgiven as he's been plying his trade on the Korn Ferry Tour.

But now he's slowly emerging as the real deal and is well-placed at the Shriners Hospitals for Children Open on the PGA Tour this week.

Going into the weekend he is in a tie for sixth place at 11-under par trying to chase down Sungae Im and new kid on the block Sam Burns at TPC Summerlin.

One thing that would have caught your eye when watching the coverage is just how similar Hall looks to Bryson DeChambeau.

Hall had some very good results in 2020 on the Korn Ferry Tour, with a win at the Wichita Open and a runner up at the Lincoln Land Championship after recording his lowest ever tournament round (62).

Hall, 24, turned professional in 2019 and attended the University of Nevada in Las Vegas, studying sociology. He's 6ft 4 ins and, like DeChambeau, is a big figure and weighs approximately 225 lbs.

Hall is an avid user of Instagram and regularly posts updates with shots of him on the course or grinding away on the range.

His swing is money and it looks similar to Colin Montgomerie's as he gets his hands very high at the top of the backswing, playing a nice little fade.

NEXT PAGE: SPORTSWASHING IS TAKING OVER GOLF... BUT IS IT RIGHT?