Sportswashing: Is it right Saudi Arabia is taking over golf and football? 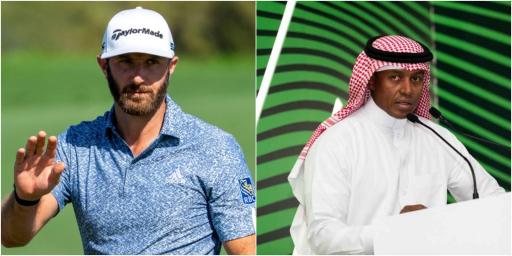 When Rory McIlroy announced his $100 million deal with Nike in the Middle East, it's fair to say he changed.

The boy who bounced around the fairways like Tigger had changed overnight and become a corporate man.

These were the words I remember Matthew Syed writing in the Times about McIlroy way back in 2013 and ever since it has gotten worse.

Blood money has been flooding into our sport more and more and now Newcastle United Football Club are the latest.

Amanda Staveley and Mehrdad Ghodoussi have been speaking at St. James' Park about their plans for #NUFC...

By taking a majority stake in 'The Magpies', it represents Saudi Arabia's boldest move yet and the Kingdom's first foray into top flight football.

Qatar has picked up Barcelona FC and Paris St Germain, Abu Dhabi took control of Manchester City, and Saudi Arabia has been waiting in the wings.

Now they have seized upon their opportunity and the deal has been described as an "extremely bitter blow for human rights defenders" by Amnesty International UK.

Newcastle United fans have told Sky Sports it was the "best day" of their lives, as they celebrated the club's takeover outside St James' Park.

Dealbroker and businesswoman Amanda Staveley told reporters "sportswashing isn't buying a club in the relegation zone" and brushed away questions stating the crown prince Mohammed bin Salman will not have any influence.

This is despite the crown prince chairing the consortium that now owns 80 per cent of the club and who is alleged to have been involved and latterly held responsible by human rights groups for the brutal murder of journalist Jamal Khashoggi.

Mohammed bin Salman is the heir to the Saudi throne and the de facto ruler - a man who jails his critics in a nation with an abysmal human rights record.

"WE HAVE OUR CLUB BACK." You'd think Newcastle had been sold to Jimmy Nail and the cast of Byker Grove. It's an investment fund from Saudi Arabia.

Don't get us started on how they treat women.

Just what exactly is Staveley smoking?

This is sportswashing pure and simple. An attempt by the Saudis to use the glamour and prestige of big money used in sport to detract from its human rights record.

If the Premier League thinks they have the assurances they need that the Saudi government is fit and proper then frankly the case for an independant regulator is made even stronger.

Money from the Saudis has already infiltrated into the golf world.

The Saudi International has still managed to attract the biggest golfers in the world but some turned it down.

Paul Casey spoke out and appears to have a conscience. I'll sit this one out, he said.

Dustin Johnson didn't appear to have any issue when he played, won twice and picked up two $3.5million payouts.

Neither did Graeme McDowell when he won.

The world's best golfers were warned they would face an immediate career ban from the PGA Tour if they were to join a breakaway league that was previously suggested.

But we know they were interested and would have in all likelihood wanted to play.

Just look at the responses their media officers gave to reporters when they were approached for comment about the proposals.

A wall of silence.

Then there was the major irony when Saudi Arabia announced they were to host two Ladies European Tour tournaments at the back end of last year with a prize fund of $1.5million.

Dane Emily Pederson picked up the cheque and the Tour moved along its merry way hailing it as a success.

At the end of the day, money talks.

It's just sad that the players will always listen.

RELATED: WHAT IS THE LATEST TIGER WOODS INJURY UPDATE?

NEXT PAGE: KOEPKA IS USING AIMPOINT BUT ADMITS 'I'M WINGING IT'