Michael Visacki shot a 3-over par opening round at the Valspar Championship and will be doing everything he can to make the cut. 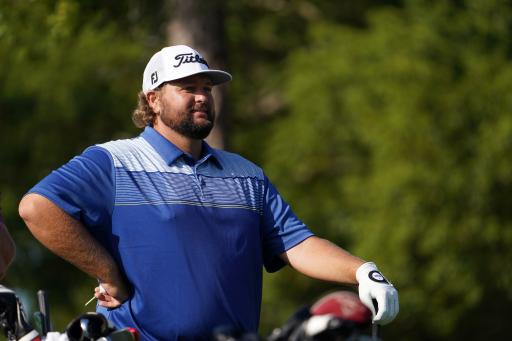 Most people hadn't even heard of Michael Visacki before he qualified for the Valspar Championship on Monday, but after seeing his emotional phone call with his dad and learning more about his journey, golf fans around the world were rooting for him to shine at Copperhead this week.

A video went viral showing Visacki sink a 20-foot putt to qualify and then phone his dad to tell him the news, as he struggled to hold back the tears after finally making it onto a PGA Tour event after years of hard work.

Visacki got off to the perfect start during Thursday's opening round, as he kept the nerves at bay to stripe a drive off the tee and almost chipped in for eagle from out of the bunker, but left a tap-in birdie putt.

"It was awesome. I thought I was going to be a little bit more nervous than I was but I felt calm, had a good warm-up session and striped one right down the middle."

The 27-year-old struggled with three bogeys in a row and added two more on the back nine, but a birdie at the par-3 13th helped towards a 3-over par opening round, matching the score of former US Open winners Justin Rose and Graeme McDowell.

"It was a lot of fun, much different than playing the mini tours," said a humble Visacki following his first round on the PGA Tour. "It was unbelievable experience."

Although the Valspar Championship features a stellar field, Visacki drew one of the biggest crowds of the day, something he is thankful for.

A +3 finish in Round 1 for @VisackiGolfer.

The support he's felt this week @ValsparChamp has been second to none. pic.twitter.com/WA8KNxtca3

"It meant the world," he added. "I play a lot with the people that were following me, so to have their support this whole week has been unbelievable.

"Everyone has been so supportive of me this week and I appreciate that and I'm going to go out and shoot a low one tomorrow, make as many birdies as I can.

"This week is going to teach me a lot about what I need to work on and what can I do to get better so that I'm able to come out here and compete full-time.

"I've been making sure I get enough rest, because it's going to be a long few days, so I've just got to make sure that I'm mentally prepared and just live my dream."