The PGA Tour has produced many rollercoaster moments in 2021, but which moments made the top seven? 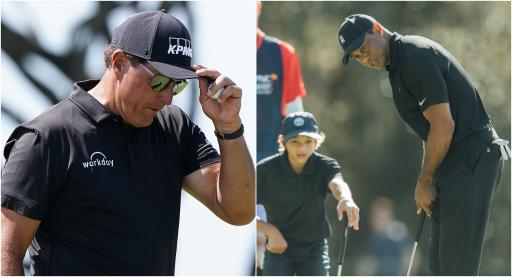 On the PGA Tour in 2021, we have seen so many new developments and characters emerge and it has all contributed to a fantastic and dramatic year on tour.

History was made when Phil Mickelson became the oldest ever major champion at the PGA Championship and also when the USA romped home to a record-breaking Ryder Cup victory.

We saw many new faces in the winner's enclosure such as Sam Burns and Garrick Higgo and many familiar faces picked up trophies such as Jordan Spieth and Patrick Reed.

Then of course at the weekend, we had the return of Tiger. The 45-year-old and his son Charlie delivered golf fans an early Christmas present with their participation in the PNC Championship.

Take a look below at the top seven moments from the PGA Tour in 2021.

Phil Mickelson rolled back the years at the PGA Championship in May to win his sixth major title. At the age of 50, he became golf's oldest ever major winner.

With rounds of 70, 69, 70 and 73, he finished two shots ahead of Brooks Koepka and Louis Oosthuizen. Lefty was a triple-figure price before he teed off at Kiawah Island which made the victory all the more incredible.

Spieth gets first win for 4 years

After the Farmers Insurance Open, Jordan Spieth dropped to number 92 in the world and he was on the brink of anonymity. He hadn't won since The Open Championship in 2017.

But something clicked. He arrived at the Valero Texas Open with some form behind him and he beat Charley Hoffman by two shots. The three-time major champion is back in the top 15 players in the world.

Team USA had one of the best teams they have ever assembled for the Ryder Cup in September. They occupied far better world ranking positions and accumulatively dominated major honours too.

Steve Stricker's team won four out of five sessions and dominated the singles 8-4. Dustin Johnson earned five points himself and it seemed like a turning point in an event that has been heavily dominated by Europe in recent years.

Fans back at The Open Championship

When the Covid-19 pandemic broke out in March 2020, it didn't take long for The Open Championship to be cancelled and for fans to be deprived of golf events for many months.

But in July 2021, Royal St. George's played host to a truly mesmerising tournament. Fans were allowed back in 75% capacity and they watched a stunning performance from Collin Morikawa.

The fans were rewarded with stunning sunshine all weekend and the Sandwich venue was in immaculate condition.

The Solheim Cup at the Inverness Club was in the balance until the very end. Europe entered the final day 9-7 up in the singles and the final session was drawn 6-6.

Matilda Castren rolled in a crucial par putt on the 18th hole to secure a 1up win against Lizette Salas to retain the Solheim Cup. Catriona Matthew became the first European captain to win the Solheim Cup twice.

Bryson DeChambeau had one of the best weeks of his career at the Arnold Palmer Invitational back in March. He won his eighth PGA Tour title by one shot to Lee Westwood.

In the third round on the par-5 6th hole, DeChambeau hit a monstrous drive of 370 yards and lifted his arms in the air. He left himself only 70 yards to the green and it led to one of many birdies for the 28-year-old that week.

Tiger and Charlie Woods at the PNC Championship

The return of Tiger Woods is arguably the best moment on the PGA Tour in 2021. After he held a press conference at the Hero World Challenge, and his 12-year-old son Charlie confirmed their participation in the PNC Championship.

They bravely came second and it has started a flurry of excitement as to when we could see the 15-time major champion next. A full PGA Tour career is off the table, but the main thing is Tiger's back.

NEXT PAGE: THE BEST NIKE APPAREL PRODUCTS THAT ARE PERFECT FOR CHRISTMAS!