Kevin Kisner is seen spitting all over the course in the final of the WGC Match Play - and it's an instant turn off for golf viewers. 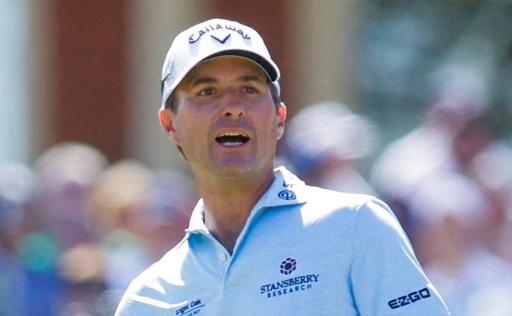 Golf fans have been tweeting their disgust at watching WGC Match Play finalist Kevin Kisner's spitting habit - and even Sky Sports Golf issued an apology for his actions during the live broadcast.

The majority of avid PGA Tour fans knew Kisner liked to chew tabacco on the golf course, but few realised just how often he spat his way down the fairway.

That was made clear to all of us with the spotlight firmly on Kisner in Sunday's WGC Match Play final against Scottie Scheffler.

Kisner was seen spitting just about everywhere on the golf course.

Sky Sports Golf's lead commentator Ewen Murray was so disgusted by what he was watching that he issued an apology for Kisner's actions.

Kisner ended up being defeated 4&3 by Scheffler, who now moves to World No.1 for the first time in his career.

Kisner needs ditch the chew. It's disgusting and I'm surprised he's allowed to spit that crap all over the course. Scheffler=class.

@ewenmurray77 Thank you so much for commenting on Kevin Kisner’s spitting Ewen. Absolutely disgusting habit, especially with Covid risks. Why the hell they cannot spit into a tissue if they need to or, a spittoon, preferably around their neck. @NickDougherty5 @lauradaviesgolf

I agree! It really is disgusting to see a grown ass man chewing and spitting every few minutes gross brown spit! Yuck.

He’s constantly spitting. How pissed would you be if your ball went through his spit.

Next Page: Richard Bland on why he still uses a fairway wood that was launched in 2010