WATCH: Scottie Scheffler misses spot, chips into the bunker, then holes out!

Scottie Scheffler produced an amateur hour moment when he missed his landing spot and chipped into the bunker, then holed out for birdie at the WGC Match Play final. 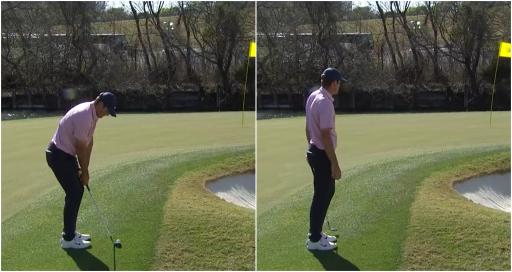 At the time of writing, Scottie Scheffler was not the World No. 1. This shot was far from something we would expect from such status.

He was playing Kevin Kisner in the final of the WGC Match Play at Austin Country Club and was cruising to a new world ranking.

Jon Rahm was surely about to be toppled as the best player in the world all because of the brilliance of one man.

Scheffler was vying for his third win in five starts. The 25-year-old was superb all week in the match play format.

He had already taken care of Dustin Johnson in the semi-final with a 3&1 victory which set up the chance to play Kisner.

Now most ordinary folk would have been a little bit worried about that little pot bonker to the right of Scheffler.

But not Scheffler. Surely as someone who was leading the FedEx Cup charge would he would never do something like this.

And then it happened. A dreadful chip, out of nowhere. Truly this was amateur hour. He put that thing straight into the bunker.

Surely we do not expect these top level professionals to miss their landing zones by this much?

Playing his fourth shot from the sand he dusted himself down and took his address position. Then he holed the damn thing!

You have just got to be kidding us Scottie Scheffler. You are taking the p***. That looked like a World No. 1 shot.

What about that, huh? He played it absolutely beautifully. Just look at Kisner's reaction too as Scheffler gave his caddie Ted Scott a high five.

Not even a flicker of emotion. Kisner matched the birdie, which showed true heart to remain three down after 12 holes.