Richard Bland discusses why he still uses a TaylorMade Burner SuperFast 5-wood from 12 years ago. 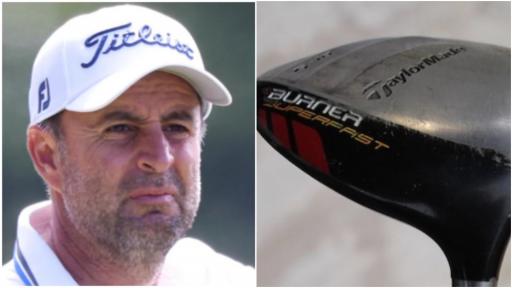 Richard Bland has revealed the latest golf equipment technology makes little difference to his distance when it comes to playing a 5 wood - and that is one of the main reasons why he continues to stick by his trusty TaylorMade Burner SuperFast, a club that is 12 years old.

Bland, who reached the last 16 before losing to Dustin Johnson at the WGC Match Play in Austin this week, was speaking to GolfWRX about some of his equipment choices.

While you can read the full GolfWRX interview with Bland here, the part of the interview that stood out to us were the Englishman's thoughts about technology making little difference to his yardage, at least in the 5-wood department.

"I’ve got a (Stealth) 7-wood, which I recently got. It’s just to give myself more options," Bland told GolfWRX.

"If I feel like it’s windy, maybe there’s a couple shots I need to hit 3-iron, because a 7-wood is not going to do it.

On using a TaylorMade Burner SuperFast 5-wood in 18 degrees, a club that was launched back in 2010, Bland believes he can still hit it just as far as the new TaylorMade Stealth 5-wood.

"It’s been in the bag a long time, since the club came out around 12-13 years ago," said Bland on his trusty Burner SuperFast club.

"The first time I took it out of the bag was at (the US Open at) Torrey Pines last year, where I put a 7-wood in and I took out the Burner, but aside from that, it’s been in my bag every single round. So yeah, it’s a bit of a relic, that one.

"I think with 5-woods and 7-woods, that can kind of thing, I really don’t think technology, when the ball speed is down (compared to a driver), I don’t think it makes a huge amount of difference.

"I think if I took a Stealth 5-wood against (the Burner), I think they would come out pretty even.

"You see a lot of guys, they might be playing with a 3-wood that’s 5 or 6 years old. I think, like the fairway woods, it’s not necessarily about the technology, it’s about the flight that you get.

"That’s what I like about that 5-wood; I can hit it high, I can hit it low, it gives me a bit of versatility.

"I was a TaylorMade player for years. They were trying to get it out of the bag for god knows how many years. It stood the test of time."

At the age of 48, Bland became the oldest first-time winner on the European Tour when winning the British Masters at The Belfry last year.

Bland is a free agent in the equipment world and that is very much reflected in his golf bag that includes a mix of TaylorMade, Callaway and Honma clubs.