Patrick Cantlay has won the second Memorial Tournament title of his career after beating Collin Morikawa in a playoff at Muirfield Village. 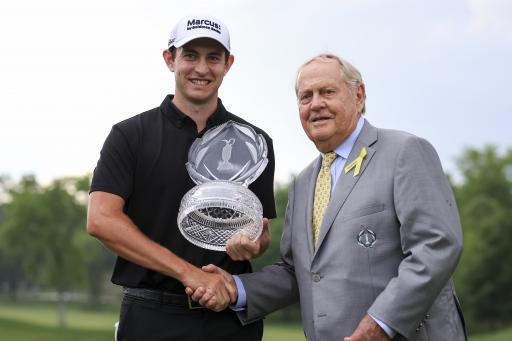 Patrick Cantlay battled to victory at the Memorial Tournament at Muirfield Village on Sunday, beating fellow American Collin Morikawa in a sudden-death playoff.

The World No. 15 won the tournament in 2019 and has now become only the seventh player ever to win this event more than once in their career.

It is Cantlay's fourth PGA Tour title in what was a strange final round that was under the cloud of Jon Rahm's withdrawal on Saturday.

"It's such a weird situation that is so unfortunate because everyone knows it would've been a totally different day today had that not happened," said Cantlay.

"But there's nothing I can do about it and I tried as hard as I could to reset and get focused. I started off a little shaky today but I hit a lot of quality shots coming in and it felt the same as when I won a couple of years ago.

"I met Jack (Nicklaus) 10 years ago and he's always been just the best to me. For someone who's the best to ever play the game, it means a lot and he's helped me a lot.

"We've spent some time together over the years, so I feel like I'm in a great place whenever I get here and this year was just the same."

The day unfolded into a three-way battle and it was Scottie Scheffler who began superbly in Ohio. He made birdie on three of his opening five holes and in the blink of an eye, the 24-year-old was leading on 12-under-par.

Both Morikawa and Cantlay, who began the day co-leading on 12-under-par, made two bogeys in their first five holes to sit one behind Scheffler and things got worse for Morikawa who made another bogey at the par-4 6th hole.

Scheffler bogeyed the 6th and 9th holes to fall back to 10-under-par and although he'd made a great start, he was one behind Morikawa and Cantlay when this final pairing entered the back nine.

There was a quiet start to the back nine from the competitive trio, but then Scheffler made two birdies at the par-4 14th hole and the par-5 15th hole to move to 12-under-par again.

Morikawa found a birdie on the par-5 11th and Cantlay made one of his own on the par-4 13th hole. Suddenly, with four holes left, all three contenders were locked on 12-under-par.

Morikawa went one shot ahead after the World No. 6 made a vital birdie on the 15th hole, but Cantlay replied with a clutch birdie of his own on the 17th hole. The pair were on 13-under-par with one hole remaining, as Scheffler bogeyed his 72nd hole to finish on 11-under-par for the week.

Both Morikawa and Cantlay parred the final hole and so a playoff was needed. Morikawa appeared the favourite in the playoff when he found the middle of the fairway and Cantlay was in the righthand rough with his tee-shot.

But Morikawa found the bunker and when Cantlay piled on the pressure with a clutch putt for par, Morikawa missed his par putt to concede the title to his opponent.

NEXT PAGE: COLLIN MORIKAWA MISSES THE BALL WITH CHIP SHOT AT MEMORIAL TOURNAMENT!