Collin Morikawa is in contention at the Memorial Tournament on Sunday, but he misjudged a chip shot so badly that he failed to hit the ball... 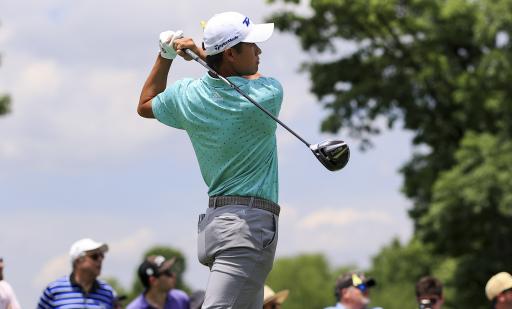 Collin Morikawa suffered a moment of embarrassment on the 6th hole during the final round of the Memorial Tournament on Sunday.

The 2020 PGA champion was faced with a tough chip next to the green on the 6th hole and his ball was sat in deep rough, barely visibly to the broadcast cameras.

Morikawa, who was one shot behind Scottie Scheffler at that point in the round on 11-under-par, swung his club underneath the ball and the ball did not move from its resting place.

The rough at Muirfield Village is brutal. pic.twitter.com/Gc67SlcRTV

The World No. 6 was visibly distraught with himself and it was almost as if he couldn't believe the error that he had just committed.

Morikawa managed to make a good chip with his next shot and he salvaged a bogey. However, even more to his detriment, Patrick Cantlay made a birdie on the same hole and the American had fallen two shots behind after six holes.

The four-time PGA Tour winner began the day sharing the lead with Patrick Cantlay on 12-under-par after runaway leader Jon Rahm was forced to withdraw after he tested positive for coronavirus.

Golf fans reacted to the shot:

Honestly I’ve played off fairways like this . They have it so easy 99 percent of the time it’s nice to see occasionally.

The way roughs should be

This is how it should be, punished for wayward shots. The PGA most of the time is like playing off carpet even in the rough.