Patrick Cantlay shot an opening round of 65 at the AT&T Pebble Beach Pro-Am as Tom Hoge went on a bananas back nine. 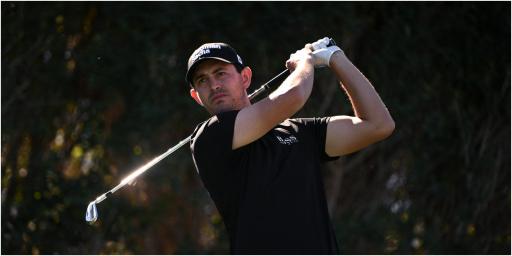 Patrick Cantlay spent the early part of this week fielding questions about why he chose to dodge the Saudi International.

Tempting as it was, Cantlay conceded, there was just something about Pebble Beach. He first played here at the age of 12.

He was fortunate enough to not pay and ever since enjoys returning to the storied, iconic venue on the PGA Tour.

Cantlay finds himself as just one of nine players in the world's top 50 playing at the AT&T Pebble Beach Pro-Am.

The "curious observer" opened up his first 18 holes by the California shore with an opening round of 6-under 65.

He was playing his first round at the Monterey Peninsula Country Club. Competitors also play Spyglass Hill and Pebble Beach.

That may look like a standard Cantlay momentum-building round. Something you'd expect from the steely American.

Three birdies were made on the front nine but uncharacteristically he dropped shots at seven and eight.

Tom Hoge, the day one leader, went on an incredible run. He found six birdies in a row from the third (he played the back first).

That included a three putt at the second for par so he could have gone even better. In the end, he reached 9-under (63) to grab the lead.

What did Cantlay say about the Super Golf League?

"I think with the amount of money they're talking about it's always very tempting. I think it's tempting for everybody. And to deny that would be, maybe not true.

"But I'm really glad that I'm here this week and I love Pebble Beach and so that definitely factored into my decision.

"I think it's a complicated thing and I don't think there's an easy answer. I think there's two sides to every coin and if people want to be more interested in golf and want to put more money into golf, I think that's a good thing.

"I think it's tricky because it's not always in the fashion that people would have expected or wanted and I would say at this point I'm definitely a curious observer as to see what happens and who decides to play."

Next page: Brooks Koepka fires a dig at Phil Mickelson