Brooks Koepka took aim at Phil Mickelson over Lefty's comments about greed on the PGA Tour. 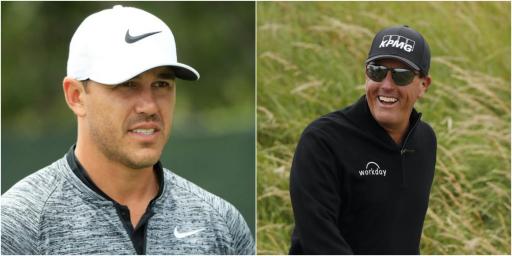 Brooks Koepka appeared to take a not so subtle dig towards Phil Mickelson over his comments about the PGA Tour's supposed greed.

Mickelson launched into an extraordinary broadside against the tour this week at a press conference in Saudi Arabia.

The topic at hand was of course money and the players' media rights. Mickelson explained his thoughts and pulled absolutely no punches.

Mickelson, 51, described how he felt the PGA Tour's greed is "beyond obnoxious" and that, "the tour only understands leverage".

His comments came in the midst of discussion in the golf world about a supposed breakaway league being formed.

Several PGA Tour stars reportedly have or will be offered huge paydays to jump ship and play on a new circuit.

"The media rights are but a small fraction of everything else," Mickelson told reporters ahead of the Saudi International.

"And it is the tour's obnoxious greed that has really opened the door for opportunities elsewhere."

Those opportunities elsewhere are of course in reference to the proposed breakaway league bankrolled by Saudi money.

Several high profile players have signed NDAs and refused to answer questions about what has been discussed.

Lee Westwood confirmed he had and Dustin Johnson laughed when he was asked about Ian Poulter being offered $22million.

Mickelson appeared to confirm he's signed something, too, and said how he believes the top 100 golfers in the world have been contacted.

Bryson DeChambeau has reportedly been offered a dizzying sum of $135million to be the poster boy but he later denied this.

Koepka picked up on Mickelson's comments about greed then posted this:

Well, judging by this, things are certainly going to get spicy over the next few weeks and months ahead.

Stay tuned to GolfMagic for all the latest news and reaction.