Patrick Cantlay is a "curious observer" over rival golf league

Patrick Cantlay explained that his love for Pebble Beach was a factor in not playing in Saudi Arabia this week, but he is keeping tabs on the situation. 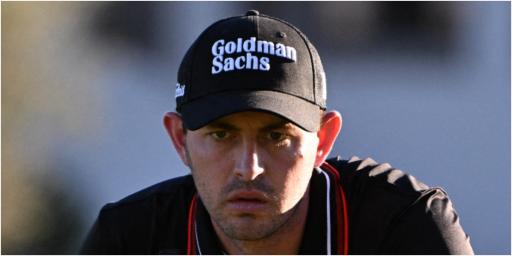 Patrick Cantlay has admitted his love for Pebble Beach persuaded him to play at the AT&T Pro-AM but the lucrative offer to play in Saudi Arabia this week was "tempting".

Speaking ahead of making his sixth apperance at the storied venue on the PGA Tour this week, Cantlay was asked about a number of topics.

Those included the first time he played at Pebble Beach and how it was almost love at first sight at the age of 12 (where he was lucky enough not to pay).

The reigning FedEx Cup champion was asked about what he learned about himself at the Ryder Cup and also of course that topic: the Saudi International.

The question was a simple one: "If you didn't like Pebble so much, would you have at all been tempted to go over to Saudi Arabia for a very nice payday for the week?"

Cantlay answered: "I think with the amount of money they're talking about it's always very tempting. I think it's tempting for everybody. And to deny that would be, maybe not true.

"But I'm really glad that I'm here this week and I love Pebble Beach and so that definitely factored into my decision."

Cantlay was asked if he had taken any public position yet over a new golf league, which is expected to come in some form by Greg Norman and backed by Saudi money.

The 29-year-old said: "I think it's a complicated thing and I don't think there's an easy answer. I think there's two sides to every coin and if people want to be more interested in golf and want to put more money into golf, I think that's a good thing.

"I think it's tricky because it's not always in the fashion that people would have expected or wanted and I would say at this point I'm definitely a curious observer as to see what happens and who decides to play."

Cantlay was asked if he would consider joining up with the best players in the world should they decide to ply their trade in a new concept.

"And so it's a complicated equation, but I would say that people - I wouldn't be surprised if people's tune changed quick if the best players, if a majority of the best players in the world wanted to play anywhere.

"Because if they did, I think there's a real desire of the most competitive people out here to play against the best players in the world almost no matter what."

Related: The time Bryson called out Cantlay for walking on his shot

Cantlay was asked a convoluted question about how players' earnings today compared to the era of Jack Nicklaus, Gary Player and Arnold Palmer.

So he was asked matter of factly: "Do you think that you make enough money out here as is?"

Cantlay said:  "Well, of course. I mean, I have a great life out here on Tour and I would say most guys out here that are playing only Tour are very fortunate and grateful for playing on Tour and being able to make such a nice living playing this game as a job.

"Because I think a lot of us would love to play golf even if it wasn't our job.

"So being able to do it as our job, I think most everybody out here is overwhelmingly excited to wake up and do this every day and I think that's one of the great parts of being a professional athlete.

"Because you grow up and that's what you've always wanted to do and now we're out here doing it and you're doing it.

"It might be a function of no tournament sticks out like The Players Championship, other than The Players on the schedule and if a few did, more of the best players in the world would play that week."

Next page: How Patrick Cantlay "p***ed off" Shane Lowry at Ryder Cup