Patrick Cantlay built on his lead at the beginning of the day at East Lake Golf Club by shooting 3-under-par on Thursday. 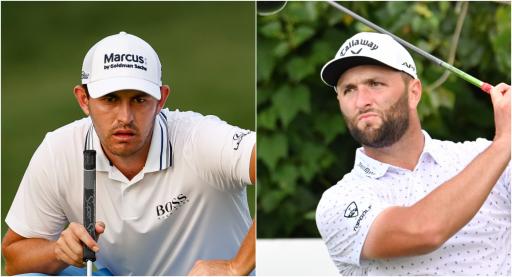 Patrick Cantlay held the two-shot advantage that he began with at the Tour Championship on Thursday, shooting 3-under-par to move on to 13-under-par for the tournament.

After starting two shots ahead of Tony Finau in the PGA Tour finale, Cantlay made a solid start at East Lake Golf Club with two birdies in his first six holes.

The five-time PGA Tour winner, who earned himself his first-ever selection in the Ryder Cup last week, added birdies at the 12th and 18th holes to complete his score of 67.

Cantlay finished on 13-under-par after the first round, keeping his two-shot lead but it is Jon Rahm who is now in second place on 11-under-par.

The World No. 1 has made four consecutive top-10 finishes on the PGA Tour and he continued his fearsomely consistent form in Atlanta with a 5-under-par 65.

Rahm made three birdies on his opening six holes, but he pegged himself back with bogeys at the 7th and 8th holes to complete his front nine in 1-under-par.

The Spaniard began the Tour Championship on 6-under-par and he added four more birdies in his final nine holes to complete his impressive scorecard and to finish on 11-under-par for the week.

Finau did not enjoy his best day at the office on Thursday. His win at the Northern Trust helped to place him in second place coming into the final leg of the FedEx Cup Playoffs, but he shot 2-over-par to drop back to a tie for eighth place.

Harris English made history at the Tour Championship on Thursday by making the first-ever hole-in-one on the 224-yard par-3 15th hole.

This helped the in-form American reach 8-under-par for the tournament, while Bryson DeChambeau shot 1-under-par to finish on 8-under-par as well.