Jordan Spieth HOLES OUT FOR EAGLE from 113 yards at Pebble Beach!

Jordan Spieth off to a flyer at Pebble Beach, but it's pre-tournament favourite Patrick Cantlay who takes an early lead with a stunning 10-under 62. 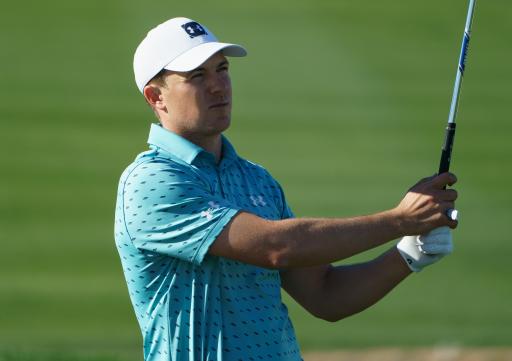 Jordan Spieth produced a moment of magic on day one of the AT&T Pebble Beach by holing out for eagle with a wedge from 113 yards at the par-4 10th.

Spieth, who returned to form at last week's Phoenix Open with a tie for fourth at TPC Scottsdale, moved to 4-under par for 10 holes after spinning his ball back into the cup for an eagle-two. WATCH Spieth's incredible shot below:

@JordanSpieth has his swagger back!

He holes out for eagle to get inside the top 10. #QuickHits pic.twitter.com/QLJk0EkobN

The three-time major champion opened with birdies at the first two holes and then added another at the par-5 6th, before handing it back at the tricky par-4 8th. However, Spieth got back in the saddle at the 10th with his stunning eagle.

Spieth went on to post a superb 7-under 65 to move into a tie for fourth and three strokes behind in-form compatriot Patrick Cantlay, who fired a joint course record 10-under 62.

The World No.11 opened with a hat-trick of birdies before adding four more in a row from the 5th to go out in 29 shots. Cantlay then added a birdie at the 11th before capping things off beautifully with two consecutive birdies to finish his round.

Cantlay, who has now played his last two rounds on the PGA Tour in 21-under par, was installed as the pre-tournament favourite after World No.1 Dustin Johnson chose to withdraw from the tournament following a second Saudi International title in three years on Sunday.

4 straight birdies.
7-under thru 8. @Patrick_Cantlay is putting on a show. #QuickHits pic.twitter.com/BwHDdfDYzq

Talented 19-year-old American Akshay Bhatia and Sweden's Henrik Norlander find themselves in a tie for second on 8-under par.

England's Paul Casey continued his good recent form with an opening 4-under 68 on the tougher Spyglass Hill course.

The AT&T Pebble Beach Pro-Am this year tees up at just Pebble Beach and Spyglass Hill rather than its typical three-course rota including Monterey Peninsula. There also are no amateurs teeing up with the professionals this week due to the ongoing coronavirus pandemic.