Spieth holed out for eagle during a 7-under par opening round at the AT&T Pebble Beach Pro-Am. 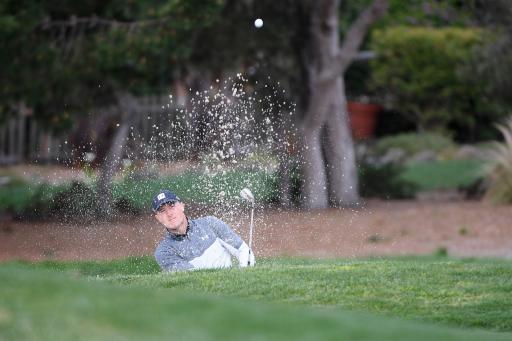 Jordan Spieth spoke about the "good things to come" after he shot a 7-under par opening round at the AT&T Pebble Beach Pro-Am on Thursday.

During last week's Waste Management Phoenix Open, Spieth made the headlines after a 10-under par third round that saw him playing like the talented superstar we became accustomed to years ago.

Following last week's PGA Tour action, Spieth said he felt he was moving the needle in the right direction and although he didn't find the victory he was looking for, the 27-year-old was taking nothing but positives from his week in Phoenix.

Pebble Beach is a place where Spieth has had success before and during the opening round the American looked relaxed and confident as he shot a 65 to get his tournament underway.

"Pebble presents, obviously, a lot of precision and you got to really trust what you're doing," said Spieth, who goes into Friday's second round just three shots off the lead.

"Early in that round you really got to take advantage. When the conditions were going to be easier today, you needed to kind of shoot a low round and make sure you're in this tournament because it's going to be a grind the next few days with the weather that we have coming in.

RELATED: Jordan Spieth HOLES OUT FOR EAGLE from 113 yards at Pebble Beach!

Spieth had a total of around 61 feet in putts on Thursday, meaning his approach play was very accurate and it's a statistic that the former World No.1 was extremely pleased about.

"Yeah, maybe the best sign of good things to come of any stat. It's also hard to have a lot of feet of putts at Pebble. I mean you don't really have a lot of long putts, the greens are so small. But I hit a lot of greens in regulation, only really got into trouble on one hole, and other than that I would still like things to feel better than they do, but I know I'm able to kind of play a shot that, kind of a punch draw if I need to have it, and it's nice to kind of feel that you can always go to a shot if you get a little bit uncomfortable."