Patrick Cantlay: What's in the bag of the eight-time PGA Tour winner?

Patrick Cantlay became the first player to successfully defend a title at the FedEx Cup Playoffs by shooting a 69 in the final round of the BMW Championship. 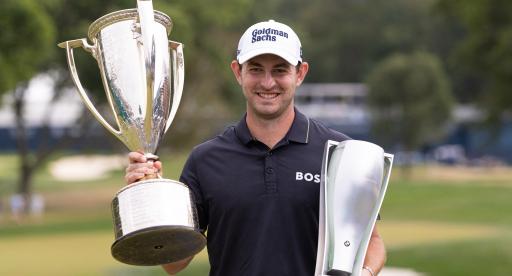 Patrick Cantlay has had a fantastic season which has been freakishly consistent. His win at the BMW Championship was his second of 2022 and his 11th top-10 finish in 19 starts.

His one-shot victory at Wilmington Country Club followed up on his win alongside Xander Schauffele at the Zurich Classic of New Orleans earlier in the year.

Now an eight-time winner on the PGA Tour, Cantlay will begin the Tour Championship in second place and two shots behind World No.1 Scottie Scheffler who finished tied third in Delaware to climb to the top of the FedEx Cup standings.

In 2021, Cantlay out-battled Bryson DeChambeau in a six-hole playoff at the BMW Championship on his way to becoming the FedEx Cup champion.

"I think every time I've tried to defend, I don't think I've been able to do it, but it's something that you definitely circle on your calendar as something you want to do. These golf courses, like I said earlier this week, reminded me a lot of each other, and I was glad not to go six holes in a playoff today," Cantlay said.

"I'm in a really good spot. It'll be a little different type of a challenge this year, obviously, being two behind Scottie. He's played a lot of great golf this year, so I expect the same. But it's a golf course I really like, and I'm looking forward to the challenge."